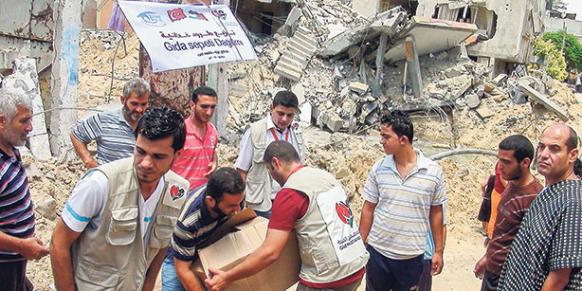 Turkish charity Kimse Yok Mu (Is Anybody There) has launched an aid campaign for the people of the Gaza Strip and called for more humanitarian aid to the region, where 342 Palestinians have been killed during Israel’s massive attack on Gaza.

Since the start of the campaign, members of the foundation have distributed food, blankets, household goods and other items to the victims in Gaza. The foundation has decided to increase the amount of humanitarian aid to those affected by the Israeli military’s intensified air and ground attacks.

Yusuf Yıldırım, who is in charge of foreign aid at Kimse Yok Mu, said on Saturday that the humanitarian situation is getting worse in Gaza as the people of the region are struggling to survive Israel’s deadly attacks. Yıldırım called for an increase in aid for the people of Gaza, saying, “I ask that Turkish people to boost the amount of humanitarian aid for the Palestinians.”

Another representative of the charity, Dr. Nasar al-Said also said there has been a shortage of medical supplies and basic foodstuffs such as rice, sugar, bread and milk in Gaza, adding, “All aid from Turkey has a huge importance to the Palestinians.”

In an effort to heal the pain the children and women of Gaza are suffering, Kimse Yok Mu hosted an iftar for 13,000 people, delivered food to 2,000 families, delivered household goods to 200 families and sent blankets to 350 families. The foundation also drilled a water well in Gaza, where thousands of people are struggling with hunger and thirst, in addition to delivering milk to 1,000 children so far.

Kimse Yok Mu doctors also extended a helping hand to the 350 Gazans who were injured during attacks by the Israeli army by carrying out free surgeries and providing medical relief. The charity also launched a donation campaign to collect medical supplies for Gazans.

Kimse Yok Mu is also repairing houses that were damaged during the Israeli attacks on Gaza residents. The foundation has not forgotten about children, delivering 1,750 liters of milk along with 1,215 packages of diapers to families with children.

Yıldırım also repeated his call on the Turkish people to raise the level of humanitarian aid to the people of Gaza.

Palestinians reported intensified air strikes and shelling as the death toll from Israel’s ground offensive rose to at least 384, including many civilians. Several Israelis — soldiers and civilians — have also been killed since the fighting began more than 10 days ago.

Hamas was elected to power in Gaza in 2007 but Israel refuses to recognize the government. Since then, Israel has staged a series of massive attacks. Major air and ground operations were first carried out in 2009 and 2012. The most recent attacks are ongoing.

A total of TL 65,056,527 ($37 million) was donated during a live fundraising telecast on local Samonyolu TV channels and radio stations. More than 9,000 people reached out in support of the earthquake victims by sending SMS text messages during the telethon.