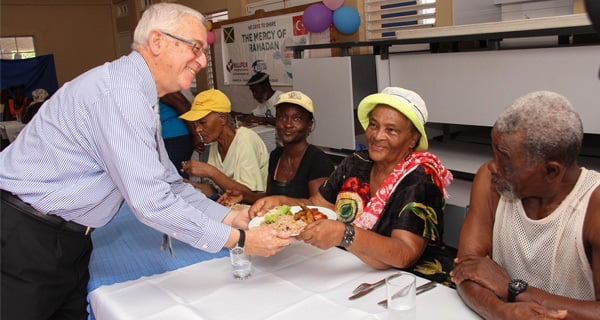 The education minister Mr. Thwaites in person served the food to the poor.

The humanitarian relief organization Kimse Yok Mu Foundation extended a helping hand to the needy in the Central American country Jamaica. The donations arrived in the country located in the Caribbean Sea after a long flight from Turkey. The aid distribution saw the participation of numerous Jamaican authorities including the country’s minister for education Ronald Thwaites along with his advisers and deputies, local authorities and volunteers. The minister Thwaites in person served the food to the poor.

After the two separate distribution sessions, 300 people received hot meal and food packages. Moreover, the foundation gave away more donations for 1,100 people across the country. The minister said he was very much touched to see donations from a country like Turkey, thousands of miles away. In his address, he expressed his thanks to the organizers and sent prayers for the volunteers sparing no efforts. Having received the donations, the aid recipients met the volunteers and said they were finally having hot meals for the first time in months. And thanked the donors for their assistance. Published [in Turkish] on Cihan News, 19 August 2014, Tuesday