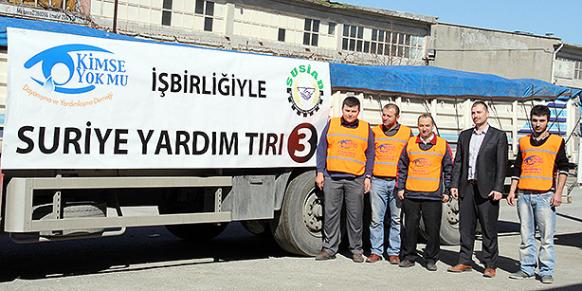 Former Culture and Tourism Minister Ertuğrul Günay, who is now an independent deputy, told Today’s Zaman that recent government-led investigations not only contradict the law, but run counter to reason. “The investigation being conducted against Kimse Yok Mu is the latest example of such investigations. This is a charitable organization which provides aid to needy people in more than 100 countries across the world, without any consideration for religion, race or language, and it has been commended by various institutions, including Parliament. Now there are politically motivated attempts to degrade this charity in public… I think this is an injustice that affects not only Kimse Yok Mu, but also the poor and oppressed worldwide.”

Kimse Yok Mu was awarded the Turkish Parliament Outstanding Service Award in 2013, and the charity was named one of the world’s 100 best NGOs by the Swiss non-profit group Global Geneva in 2014.

Main opposition Republican People’s Party (CHP) parliamentary group deputy chairman Akif Hamzaçebi, speaking to Today’s Zaman, questioned whether sacrificing animals for the religious Eid al-Adha (Feast of the Sacrifice) holiday is a crime, and asked whether the sacrifice can be considered a terrorist act. During Eid al-Adha, animals are slaughtered as a reminder of the Prophet Abraham’s willingness to sacrifice his son, Ishmael, to God as an act of obedience and submission. A portion of the meat is then distributed to the poor, along with other charitable donations, as per Islamic tradition. Each year, tens of thousands of animals are sacrificed by Kimse Yok Mu and the meat is distributed to people in need around the world.

“Kimse Yok Mu is an association that is beneficial to the public. Its beneficence was also recognized by the Cabinet, led by then Prime Minister Recep Tayyip Erdoğan, in 2006. The terrorist organization investigation against Kimse Yok Mu is hypocritical. As far as I know, some [Justice and Development Party] AK Party deputies have taken part in many aid activities that were conducted by Kimse Yok Mu. You [the government] have been very close to the charity for years; you have benefited from its opportunities and you have gained, politically, from the aid provided by this charity. Now you are conducting an investigation against it, claiming that it is a terrorist organization. This [probe] is ridiculous,” Hamzaçebi said.

The CHP parliamentary group deputy chairman stressed that associating a charity with a terrorist investigation cannot be accepted, making clear that the government has begun this investigation to further its own agenda.

Kimse Yok Mu, which is affiliated with the Gülen movement, also known as the Hizmet movement and inspired by the teachings of Turkish Islamic scholar Fethullah Gülen, has become a target in a battle launched by the AK Party government. Several pro-government media outlets are waging a smear campaign, accusing the charity of engaging in illegal fundraising activities, despite a lack of evidence.

Also speaking to Today’s Zaman, CHP İstanbul deputy Mahmut Tanal called the investigation a “massacre of law,” explaining that a group must engage in threats, intimidation, or oppression, in order to be labeled a terrorist organization under the Turkish Penal Code (TCK) and the Counterterrorism Law (TMK), adding that Kimse Yok Mu only engages in aid activities. “Thus, the investigation is very absurd and slanderous,” Tanal said.

Civil society organization Compassion Association (Şefkat-Der) President Hayrettin Bulan called slandering Kimse Yok Mu, a charity that operates with transparency, a desperate act, stressing that the investigation is another of the government’s efforts to intimidate the Hizmet movement. “Those who support this investigation, or who remain silent about it, are committing sins by violating the rights of poor people, orphans and those who are oppressed,” he said.

The leader of the Syrian Democratic Turkmen Movement, Abdulkerim Aga, also criticized the investigation, saying that Kimse Yok Mu has stood with the Syrian people, and has sent large amounts of aid to Syria since the start of the civil war. Aga also mentioned that Kimse Yok Mu is an honored association in Turkey. “Now this association is being targeted with an investigation based on wrong information. In our opinion, this is a big mistake,” Aga said.

A statement on the herkul.org website, which broadcasts weekly speeches of Gülen, said Gülen’s doors are open to everyone. “We are following the path of 13th-century Sufi philosopher and poet Rumi. Our hearts and doors are open to everyone. We have all kinds of tea and refreshments here. Freedom of expression and thought is what we have also been defending unless it contains insult.