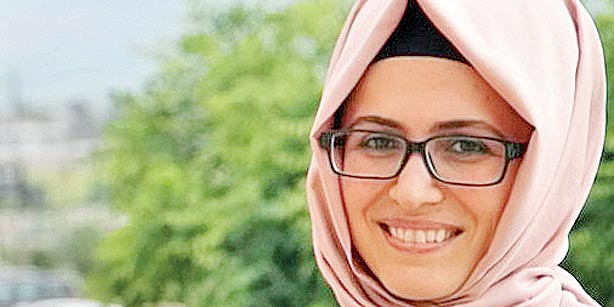 Prime Minister Erdoğan had told the correspondent from the Zaman daily, which he associates with the so-called “parallel state,” to leave her job while speaking to journalists at İstanbul Atatürk Airport before catching a flight to Azerbaijan on Friday.

Mezararkalı had asked the prime minister if former EU Affairs Minister Egemen Bağış would be expelled from the party over a leaked recording in which he is heard making fun of the Quran during a phone conversation with a friend.

Addressing the Zaman reporter, Erdoğan said: “You are a journalist but you are unaware of the statement made by our friend [Bağış]. He has already stated such a conversation never took place and that it would be impossible for him to say this. We know our friend more than those who engage in montages, dubbings or other fabricated things. We believe our friend when he declared he never said those words. Such an incident cannot be possible. We will never work together with someone who does such a thing [mocking verses from the Quran]. Our friend has already thoroughly denied this allegation. Thus, there is nothing more to add.”

Referring indirectly to followers of the faith-based Hizmet movement, which the Zaman daily is affiliated with, Erdoğan further stated that those who targeted Bağış had also targeted him, claiming that he doesn’t perform Friday prayers. The prime minister said he knows more than these people and he would never ask them when, where or how he performs his prayers. Erdoğan said those people are “fabricators and liars.”

Erdoğan then told Mezararkalı to leave her job, stating: “I think you should change your place [job]. Don’t stay there [at Zaman] any longer. It is not right to be with libelers. Regarding the issue of Tayyip Erdoğan not performing Friday prayers, I would be happy if you could say [to your editors], ‘Aren’t you ashamed of coming up with such claims?’”

Speaking to Today’s Zaman regarding the incident, Mezararkalı said she would not leave Zaman, adding she has been following Erdoğan’s public appearances for over a year and would continue to do so. The correspondent also said she had been attacked on Twitter after the incident by some users close to the government accusing her of being a “hit man.”

When asked about her query during the press conference, Mezararkalı said no one had instructed her to ask Erdoğan the question, adding even her bosses did not know what she would ask the prime minister.

Stating that what Erdoğan had done was a clear intervention in press freedom, Mezararkalı stated: “As far as we know Turkey is a democratic country. Accountability and transparency carry great importance in democracies. Transparency can be achieved with freedom of the press in a country. Putting the press under pressure means the government is moving away from being democratic. The prime minister’s order for me to leave my job was also a clear intervention. We journalists don’t do our jobs on someone’s orders. I even didn’t receive orders from my chiefs on what questions to ask. I cannot accept this.”

Mezararkalı also said she was upset to see the prime minister targeting her and the organization directly during a press conference.

This was not the first time Erdoğan has targeted Zaman reporters asking him questions on various occasions.

On Feb. 3, Erdoğan declared Zaman reporter Derviş Genç, who asked the prime minister a question on corruption allegations after a major graft investigation became public on Dec. 17 of last year, a speaker of the “parallel state” during a press conference held at Atatürk Airport before his visit to Germany.

Another Zaman reporter Ahmet Dönmez was exposed to the same treatment during a joint press conference held by Erdoğan with Spanish Prime Minister Mariano Rajoy on Feb. 11. Becoming angry with Dönmez’s questions, Erdoğan used insults against the Zaman reporter.

Messages of support have come from Mezararkalı’s colleagues, who condemned Erdoğan for his harsh rhetoric against her.

Abakay also said the prime minister is trying to send the press the message that he will destroy those who are against him.

An audio recording that was leaked to YouTube on March 18 revealed Bağış mocking the Quran in a phone conversation with journalist Metehan Demir, stirring up reactions against Bağış, especially among scholars who believe he has committed blasphemy.

In the recordings, the alleged voice of Bağış can be heard making jokes about the Quran, saying that he “tosses” verses from the Quran onto Twitter every Friday, presumably in an effort to present himself as a religious person. The revelation elicited a strong reaction on social media as even well-known Twitter users close to the ruling Justice and Development Party (AK Party) criticized Bağış for his disrespectful remarks about the holy book of Muslims.

Following the negative backlash, Demir acknowledged the existence of such a conversation, stating that although there might have been some modifications to the recording, he apologizes for his deed. Demir was then removed from his post at the Hürriyet daily where he was a columnist. Despite Demir’s confirmation, Bağış denied the recording and said he had never held such a conversation.