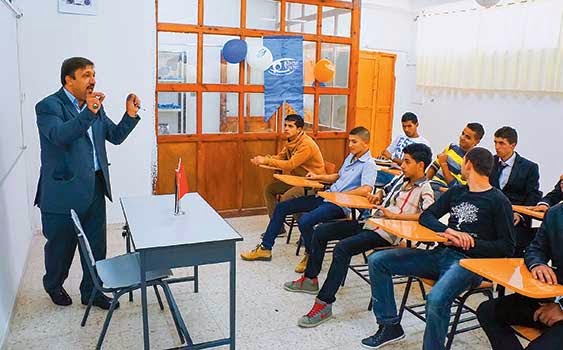 Esref, a 14-year-old at Kimse Yok Mu’s vocational school for the orphan in the Western Bank, has been learning Turkish language at the country’s first ever language and culture center. “You’ve brought hope for the Palestinian orphans. You changed the mood here,” Esref said and expressed his thanks. “We are now more hopeful about our future. We love Turks.”

Another trainee at the school, Seyyid Hasan said, “Food and housing aid is important for us but we need education too for our future. This training school will secure us a job in this country.” Similarly, “So glad that we have you here. This school is of golden to us. May Allah be pleased with you,” said the first trainees of the school.

The schools will train 32 students in total in air-conditioning and Turkish language. Additionally, 50 new students including the ones at this school will be sent to Turkey for study. KYM’s official in Jerusalem, Harun Tokak, said “Every country has an orphan population but Palestinian has too many. We have to take care of these children. We’re here to embrace them and will hopefully achieve it.” Tokak said the government is able to take care of barely half the orphan population. KYM has researched the ways to help for the past five years, Tokak said. “We will assist students by opening more language courses and study halls. And by establishing new schools, we’ll make sure they receive education with ease. This zone is under too much conflict. The religions are for friendship not enmity. The locals asked us why we left them 100 years ago and didn’t come back.”

KYM’s director for the Middle East, Eyup Tok said, “We have done the groundwork. We’ve brought the equipment from the US and Europe. There’s almost no chance for the students to end up unemployed after this training. It’s because air-conditioning is one of the top industries here.”

KYM cares for the orphans in 40 countries

The foundation’s coordinator for the orphan projects, Orhan Erdogan said, “Palestine seriously needs such initiatives for its orphans to have a job and have their own lives. We have more projects coming up, in this respect. As KYM foundation, we have opened an electronic library for a state university in Gaza. We’ve been taking care of one thousand orphans in Gaza. Besides, we’ve been providing food, education, healthcare, housing assistance and vocational training for orphans in 40 countries around the globe.”