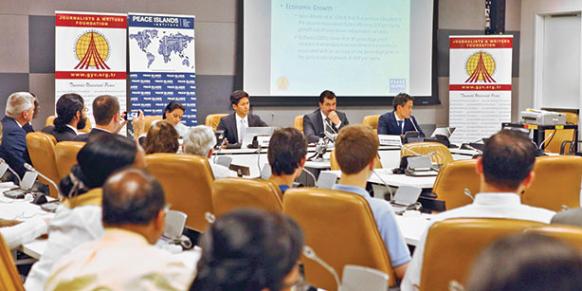 The Hizmet movement has been mentioned as an organization making a major contribution toward the Millennium Development Goals of the UN through education, at an international panel at the United Nation’s headquarters in New York on Tuesday organized by the Journalists and Writers Foundation (GYV) and the Peace Islands Institute (PII).

The 2015 Millennium Development Goals of the UN were discussed in the international panel, with participants agreeing that the goals can only be sustainably achieved through education. The deputy chairman of the GYV, Hüseyin Hurmalı, said ignorance, poverty and discrimination are the most important contemporary global problems. Hurmalı noted that the only sustainable solution to these problems is education. Referring to the teachings of Islamic scholar Fethullah Gülen, Hurmalı said, “Gülen sees education as the only way to eradicate ignorance and bring about peace.”

Stating that the Gülen-inspired Hizmet movement has been striving to achieve global peace and sustainable development, Hurmalı drew attention to the educational services provided by the Hizmet movement at all levels, irrespective of students’ backgrounds. According to Hurmalı, the Hizmet movement turns the “theory” of the 2015 Millennium Development Goals into practice through education.

Speaking to the audience about the global educational activities of the Hizmet movement, which continued even during the height of the war in Bosnia and Herzegovina, Hurmalı said that even while Serbs, Bosnians and Croats fought each other, their children received an education under the roof of the same Turkish school in the Bosnian capital, Sarajevo. “These children became examples of peace to the world while their fathers and grandfathers fought each other,” Hurmalı said.

One of the panelists, Swadesh M. Rana, a senior fellow at the World Policy Institute in New York and the UN representative of the Academic Council on the UN System (ACUNS) and former chief of the Conventional Arms Branch at the UN Office of Disarmament Affairs (UNODA) at the United Nations, praised the activities of the Hizmet movement. She said she would support anyone who provides education at a global level since it is a service to humanity.

Stating that sustainable development and peace can only be achieved through education, Rana said ignoring education would result in terrorism, ignorance and extremism. She also emphasized the importance of the education of girls in contributing to equality of opportunity in societies.

Stating that Turkish schools are becoming more widespread in Kenya, Androga said these schools do not have a religious curriculum. According to him, these schools do not provide students with merely a quality education but also provide them with a global vision. Androga praised the friendly nature of the teachers in the Turkish schools as well as their selfless efforts and close interests in the students. He added that the attitude of the students was the biggest source of their motivation.

Corruption is a threat to a nation’s future

According to Alcala, research has shown that corruption has a negative impact on a country in all areas, from attracting investment to education and health services. He further stated that corruption harms not only the private sector but the whole of society. Providing examples from the recent earthquakes in Pakistan and China and the typhoon that hit the Philippines and Bangladesh, Alcala said many schools had been destroyed because they were not built in accordance with legal requirements, due to corruption.