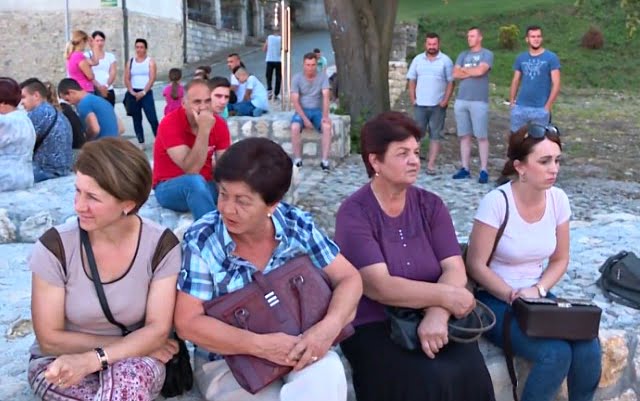 Relatives, friends and neighbours of Selmir Masetovic, arrested in Turkey because of alleged links to the Gulenist movement, took to the streets of his hometown Gradacac to call for his release.

Around 100 Bosnians gathered on Monday in the town of Gradacac to protest about Turkey’s arrest of Selmir Masetovic, including the detained student’s relatives, friends, neighbours and the local mayor.

Masetovic, a 21-year-old student at the University of Usak, was arrested last month in the western Turkish city, accused of being part of a network led by exiled cleric Fetullah Gulen, who Ankara believes was behind the failed coup in the country in July 2016.

“My son Selmir is not a ‘Gulenist’,” his father Husein Masetovic was quoted as saying by IBNA.

“At the time of the coup in Turkey, my son was at home in Bosnia and Herzegovina and had nothing to do with the events there,” he added.

Masetovic said on Monday that his son has received legal assistance in Turkey and thanked a Bosnian businessman, who wants to remain anonymous, for agreeing to finance the student’s defence, but complained of a lack of information about the case.

On Tuesday however, he told regional TV station N1 that he has now been in contact with his son by telephone.

“It is most important that we have come into contact, it is good that he is healthy,” he told N1.

He explained that his son told him that an investigation is ongoing, that he has denied any involvement in the alleged crime, and that he was not allowed to make a phone call earlier.

Dervisagic told media that the municipal board was convened last week and discussed ways of assisting the family.

“The municipality must find a way to help our fellow citizen Selmir Masetovic and his family. We will always be in contact with them,” Mayor Dervisagic was quoted as saying.

According to the prosecutor’s office in Usak, Masetovic was using Bylock, an encrypted messaging application which the Turkish authorities claim is utilised by Gulenists for secret conversations.

Having and using the Bylock app has been accepted by Turkish courts as evidence of being a member of Gulen’s movement. Ankara describes the movement as the ‘Fetullah Terrorist Organisaton’ or F..O.

Masetovic was among several foreign students in Turkey who were arrested.

Turkey’s pro-government Daily Sabah reported on May 28 that prosecutors believe that Gulen movement members “tricked students into buying cellphone accounts and gave them to their own members, apparently in a bid to avoid detection amid the escalated crackdown on the group after the July 15, 2016 coup attempt”.

“Fourteen students from various countries had two phone numbers each, and each one was used by the group’s members all across the country, according to prosecutors,” the newspaper said.

Gulen has denied any links to the failed coup and has asked an international commission to investigate the attempted overthrow of the government.

As well as the protesters in Gradacac on Monday, Bosnian opposition parties, NGOs and civil rights groups have also demanded that Masetovic be freed.

NOTE: This article was updated on June 5, 2018 to add that Masetovic has now been in telephone contact with his son.