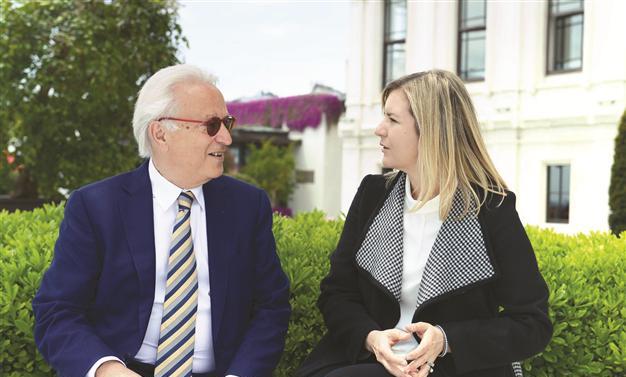 Turkey is further away from European Union membership today than it was seven years ago, Hannes Swoboda, leader of the Group of the Progressive Alliance of Socialists and Democrats in the European Parliament, has said, voicing concerns over judicial independence in the country.

“It is a long-term process. We are further away from the accession than perhaps seven years ago. But that does not mean you are totally away from it. This is the process; you get closer, then you get far away a bit … at the moment, we are a bit far away,” Swoboda told daily Hürriyet on the sidelines of a conference titled “International Symposium on Justice and Rule of Law” held in Istanbul last week for the first time. “For the short term, we are in a very critical situation. But we cannot give up the long-term aims.”

In the last two years, Turkish Prime Minister Recep Tayyip Erdoğan has changed and has rolled back some reforms that were significant for the EU, according to Swododa.

“When Erdoğan came to power, he started some reforms, speaking about a Kurdish solution, pushing back the military to its corner internally and changing the criminal code. These were the moments when we thought ‘OK, we are moving forward.’ But then in the last two years, Erdoğan started to like power too much and attack judicial institutions. This is pulling back some of the reforms we were defending,” said Swoboda, recalling that the Turkish government’s new legislation transferred significant powers over the High Council of Judges and Prosecutors (HSYK) to the Justice Ministry, a development reversing previous reforms.

He said Europe and Turkey had to work for accession. “We have to convince our citizens in our countries that Turkish membership would be good,” Swoboda said on Europeans’ side. For Turkey’s part, it should do “a real constitutional reform” and realize “decentralization,” he added.

“You can’t keep such a big country together with populations including the Kurdish one in a unitary state. It is one of the issues, but there are many other issues concerning democratic reforms,” said Swoboda.

He also said center-right European politicians could cease supporting Turkey’s accession process in the near future, predicting that there would be more extremist parties in the European Parliament after the elections. “The danger is that some right-wing parties could move away from the enlargement and Turkey issue because they are afraid that they could be eaten up by the extremists. The effect will not be immediate, but we might see the influence over the center right,” Swoboda said.

Swoboda voiced concern over Erdoğan’s recent steps to limit the independence of the judiciary.

“There are some developments in the domestic scene concerning the independence of the judiciary, concerning the question of individual rights and the attempt to close Twitter and YouTube. These are symbols. We, in Europe, are concerned about this trend. We see some positive developments in Erdoğan’s policy on the Kurdish issue, the Armenian issue and other areas. But domestically, we have some serious doubts,” he said.

Swoboda said the main problem in the judicial system in Turkey was the government’s move to
reshuffle officials from the judiciary and police on the grounds that they were members of Islamic scholar Fethullah Gülen’s movement.

“The main problem is that there are severe accusations from Erdoğan against the Gülen movement over infiltrating the judiciary and the police. He is using this argument to change a lot of personalities in the judiciary and police, trying to restrict the independence of the Constitutional Court and the HSYK. Therefore, we fear for the independence of justice,” he said.

Swoboda said the Gülen movement alone was not to blame, even if it has infiltrated the judiciary and police institutions, noting that the prime minister must have had a role in such a period.

“If they had the chance to infiltrate, they could only do it when Erdoğan came to power. Maybe somebody very close to the movement opened the doors for them to the administration. Now the government is going against them without [stating] the necessary transparency,” he said, adding that Erdoğan was afraid of revealing when and how members of the Gülen movement attained top positions in the judiciary and the police since he aided them in their rise.

He also said judges must reveal whether all the officials reassigned and dismissed from their profession were members of the Gülen movement and involved in any coup attempt against the government.
“If you mistrust the judicial system, then you will have to invite judges and lawyers from outside to look into it objectively without being bound by anything,” he said.

He also defined the last two years of Erdoğan’s leadership as “autocratic,” creating enemies outside and inside the country to control the people.

“He is an autocrat. The language he uses is the typical language of an autocrat,” he said, likening Erdoğan’s rule to Viktor Orban in Hungary while also differentiating it from President Bashar al-Assad’s rule in Syria.