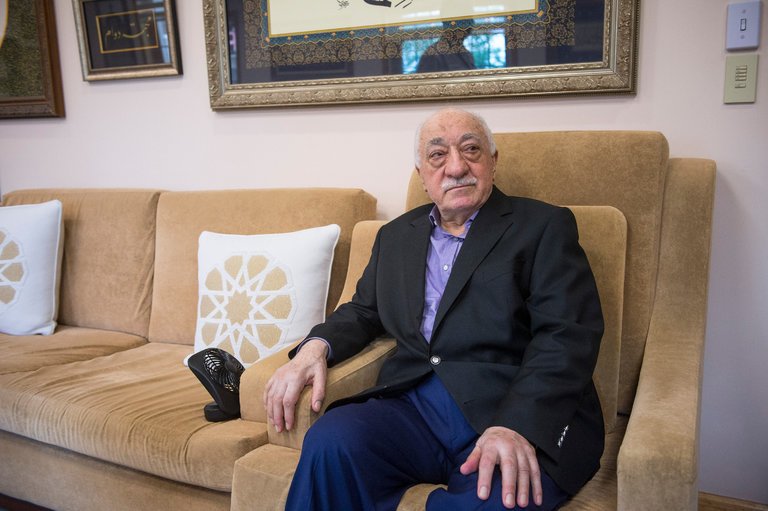 SAYLORSBURG, PA. — Fethullah Gulen, the Turkish cleric whom President Recep Tayyip Erdogan of Turkey has accused of inspiring the coup attempt against his government, gave a rare interview on Saturday at his compound here in which he denied involvement in the coup, but compared Mr. Erdogan’s administration to that of the Nazi SS.

While decrying the coup attempt, Mr. Gulen also acknowledged that he could not rule out involvement by his followers, saying he is unsure who his followers are in Turkey.

The leader of a Turkish Muslim sect, Mr. Gulen and his followers have built a global religious, social and nationalistic movement, and are also considered to be the driving force behind more than 100 charter schools in the United States.

At the core of his movement, promoted as a peace-loving form of Islam, is the concept of Hizmet, which his followers describe as a type of public service.

After a brief return to Turkey following a stay at the Mayo Clinic, Mr. Gulen has lived in self-imposed exile in the United States since the late 1990s. At the time, he was accused of attempting to promote an Islamic state in Turkey, but was ultimately cleared of those charges. At one point, though, the United States government tried unsuccessfully to have Mr. Gulen deported because it said his visa had been improperly granted. A federal judge in Pennsylvania blocked that move.

In a televised speech on Saturday, President Erdogan said the United States should extradite Mr. Gulen to Turkey; Secretary of State John Kerry said earlier in the day that he would review any extradition requests for Mr. Gulen.

“Obviously, we would invite the government of Turkey, as we always do, to present us with any legitimate evidence that withstands scrutiny,” Mr. Kerry said during a visit to Luxembourg. “And the United States will accept that and look at it and make judgments about it appropriately.”

At his meeting with reporters, Mr. Gulen said neither he nor any of his aides had been contacted by federal authorities.

Mr. Gulen’s network controls billion-dollar business interests such as media companies, banks and construction firms. His operations have attracted a great deal of scrutiny by the United States government, particularly related to his movement’s charter schools, which have imported hundreds of Turkish teachers, many of them scientists with advanced degrees. Recently, Mr. Erdogan’s government filed a complaint against Mr. Gulen’s network of more than 30 schools in Texas.

While denying involvement in the coup attempt, Mr. Gulen was highly critical, however, of Mr. Erdogan’s administration.

“They have no tolerance for any group not in their total control,” he added.

He applauded “Hizmet” participants — regarded as his followers — who had been arrested. “In spite of everything that has been done to them, they did they not resort to violence,” Mr. Gulen said. “This shows that they are on the right path.”

Reporters had gathered outside Mr. Gulen’s compound here on Saturday, along with a few pro-Erdogan protesters carrying Turkish flags. In addition to a tour of the grounds, which are used as a study retreat by the movement’s followers, reporters were given access to Mr. Gulen’s private room, which was furnished with a mattress on the floor and a space heater, as well as dozens of books.