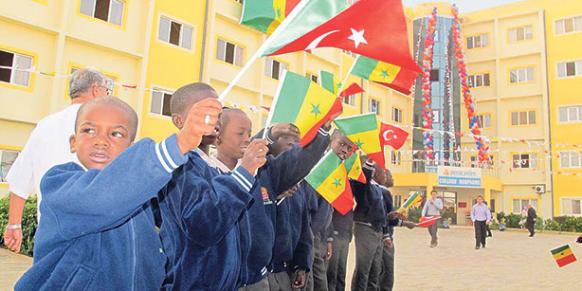 Yavuz Sultan Selim Turkish College in Senegal is one of the many Hizmet-inspired schools in the country.(Photo: Today's Zaman)

He got very few positive responses; indeed, these were a few undemocratic countries who were not in favor of diversity in their education system. Mostly his demand has been ignored by his counterparts, which could be perceived as quite a rational attitude. Below is a brief summary of why ignoring Mr. Erdoğan on this issue seems rational and why his demand seems irrational.

The irrationality of viewing others as dumb

Turkish schools have been operating throughout the world for at least more than a decade, in some cases for more than 20 years. Some 15-20 years ago, it wasn’t a regular occurrence for a Turk to arrive in a foreign country to construct a school. There was prejudice and suspicion in those countries. So people, as well as the authorities in those countries, tested the sincerity of those Hizmet people who arrived and evaluated their actions cautiously for years. They have experienced personally how enthusiastic the well-educated, young Turkish teachers, who had graduated from the best universities in Turkey, were, as they would paint or clean their school buildings like ordinary workers.

They have seen how determined the teachers were in times of political crisis or violent upheavals in their countries. Of course, the teachers’ extraordinary goodness was looked upon suspiciously for some time, especially in a world where people are not very used to unpaid goodness. But they concluded that the sincerity of the teachers and the sustained success of the schools were a reality. Thus, the Hizmet schools made positive social and economic impacts in the countries where they have been operating.

The schools served as cultural and economic bridges between Turkey and the host country. They have become phenomena throughout the world over the past 10-20 years.

Keeping all the above mentioned points in mind, calling on foreign states to close these schools is to say them: “Oh, your intelligence agency doesn’t know anything. You’re so naïve and they are cheating you. Besides, although the schools are constructed on your sovereign land, I think I have a right to demand their closure.” Does this sound rational as the words of the leader of Turkey?

The second point when it comes to viewing other countries as fools lies in the alternative offer that has been made by the Turkish government: the construction of projects by the Housing Development Administration of Turkey (TOKİ) and support from the Turkish Education Ministry. TOKİ stands for stagnant, impersonal construction projects of the state, which have no aesthetic whatsoever, but through which some people close to the government have earned lots of money. Mr. Erdoğan offered to support TOKİ constructions during a visit to his last African destination If the African governors would make a small investigation into TOKİ, they would find that it wouldn’t be a rational choice in the long term.

Planning to offer support from the Turkish Education Ministry or demand that the Hizmet schools become attached to the Turkish Education Ministry is really a very insanely bold suggestion, besides the scandalous fact that the offer would be an interference in the domestic affairs of a country. The Turkish education minister himself declared a few days ago that the Turkish education system is a puzzle. The education system is structurally a dinner for dogs, and is qualitatively way on the bottom of the Organization for Economic Cooperation and Development (OECD) countries’ scores for education. The Programme for International Student Assessment (PISA) scores for education are also not very clean-cut for Turkey.

A teacher friend of mine who admires Mr. Erdoğan and supports the Justice and Development Party (AKP) admitted yesterday that the education system is a mess and she would call anybody who would claim the opposite crazy. The issue needs a few articles on its own. But to sum up we can say, uncertainty, dissatisfaction and incapability are the key to describe the Turkish education system. So, offering support from the head of this system to globally institutionalized schools is nothing but irrational and foolish.

The irrationally of diminishing one’s own soft power

Normally, countries try to make themselves more well-known in the eyes of other countries, strengthening and varying sources of interaction through social and economic bonds. Before 10- 15 years ago in many destinations around the world, the Turkish Republic had neither an official nor an honorary ambassador or any other sort of diplomatic bond.

The people got to know Turkey for the first time through the Hizmet teachers and, afterwards, the businessmen of Turkey. Most of the time this experience was a positive one. In several cases, the Turkish Republic’s official and diplomatic arrival to different countries around the world only happened after the opening of Hizmet schools in that region.

Now, President Erdoğan is drawing a sword against the Hizmet schools, which had become the civil representatives of Turkey abroad for decades. He is targeting its own citizens abroad as if they are a threat, which means he is trying to diminish a core soft power element of Turkey abroad. The sort of irrationality on this issue seems really unique in the field of political science.

The irrationality of overconfidence

The schools are private enterprises, usually owned by private foundations. The Turkish government is attempting to find a way to buy the schools. The overconfidence of this is really admirable; how on earth can they imagine that the people in the Hizmet schools will be convinced to sell their schools to some people/institutions that are cursing them day and night?

I guess the overconfidence of Turkish governors is related to their mindset that everything has a material price. But this mindset falls short of providing an explanation for the Turkish teachers’ spirit abroad. They made decisions in favor of less material acquisition; if the teachers prioritized earning more, they wouldn’t have gone abroad, where they usually have a fairly humble salary.

The Hizmet schools phenomenon is that it is a global socio-cultural entity that has constructed a universal language of peace. It has a unique spirit that allows it to assemble an Australian, Asian, African, European and American around the same table. Even if the Hizmet schools are closed, people of this spirit all around the world will continue to seek and serve a global, peaceful coexistence. Power seems an irrational choice when a spirit is spreading voluntarily.