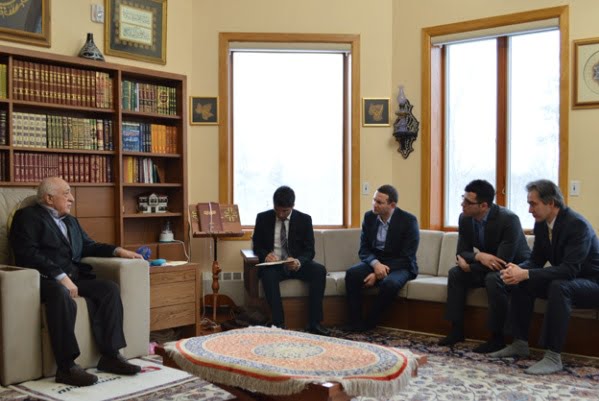 “It is certain that there is corruption,” Gülen told BBC, in his first televised interview in 16 years, from his austere room in Pennsylvania, where he spent his last 15 years.

“Everyone accepts this. From the uneducated, to the educated to the elites – everyone sees and knows what is going on. And no person has the power to cover this up,” Gülen told the British  network.

Gülen’s interview came at a time when he even stopped his weekly speeches amid an intense campaign led by Turkish Prime Minister Recep Tayyip Erdoğan to defame the movement and describe it as a “gang” that “infiltrated to state institutions.” The term gang Erdoğan frequently wields, örgüt in Turkish, has become a euphemism to describe terrorist Kurdistan Workers’ Party (PKK) in Turkey.

Gülen said he suspects some people have discomfort with the Hizmet movement, a faith-based, loose network of people inspired by teachings of the Islamic scholar. He argued that the corruption investigations, which implicated sons of three ministers, businessmen close to the government and chief of the state bank, are being used as a pretext against the movement.

Gülen said judges and prosecutors overseeing the corruption investigations are being removed and reassigned across the country and that when these people return to their posts, he said he believes they will do so by proving their worldviews and outlooks.

“From among the judges, prosecutors and police that were reassigned there will be those who have a nationalist outlook; those sympathetic to the National Movement Party (MHP) and those sympathetic to the ultra-nationalists,” Gülen said, referring to the fact that not all those who were reassigned to other posts have sympathy toward the Hizmet movement.

He noted that there is an attempt to portray the Hizmet movement as “very big and spread everywhere” to justify an oft-cited argument that the movement comprises an alternative or parallel state.

The scholar added that those who are behind the defamation campaign against the Hizmet movement are trying to scare people by showing the movement as very big. He argued that there is an attempt to break away supporters of the ruling Justice and Development Party (AK Party) who are sympathetic to the movement.

“I suspect that they are using these corruption investigations as an opportunity to show their discomfort with the movement. Perhaps those that are doing this today will regret their actions in the future,” Gülen stressed.

Gülen spoke about regret of others who confronted the Hizmet movement in the past and said as history repeats itself, these wrongdoings and actions have been repeated, especially in recent history. He said there are partisan supporters in the media that are misrepresenting certain things.

Gülen said actions against the movement are also causing Turkey to lose, adding that the recent anti-democratic actions will affect the view of the United States and the European Union about Turkey in a negative way because these government actions are anti-democratic and against the rule of law. “Almost everyone is saying this today.”

Gülen, however, said he is committed to remain silent and that he has not and will not express an opinion on these matters.

Gülen recalled a leaked document from the National Intelligence Organization (MİT), which warned Erdoğan about close relationship between Iranian businessman Reza Zarrab, who is arrested as part of the investigation, and the Turkish ministers eight months before the graft probe.  He said people in the judiciary and the police carried out investigations and launched this case, “as their duties normally require.”

He noted that the corruption investigation made the government “unhappy,” prompting them to speak about a “state within a state.”

“They are not talking about wrongdoing such as bribery, about the rigging of state bids. These things are being presented as normal and acceptable. This is what it is,” Gülen said.

“This situation has nothing to do with me. As I have previously said, I do not even know 0.1 per cent of those running these investigations. I can say this wholeheartedly,” Gülen added.

He said any form of wrongdoing by the government is discomforting but it is wrong to think that all the people the government purged and reassigned are those sympathetic to the Hizmet movement. “From among those people I believe there are social democrats, nationalists and ultranationalists,” Gülen said, adding that “it is not in our hands to say to people never ever to feel sympathy towards the movement.”

Gülen denied that the movement he inspired have ever been completely aligned with one particular party. He noted that the movement always considered it as part of their responsibility to support the right work of political parties. He reminded his encouragement of people to vote “yes” for 2010 referendum on constitutional amendment as part of this mentality – a first in his life.

Gülen said the Hizmet movement had no any relationship with any political party other than casting a vote at the ballot box. He said two people who had sympathy for the Hizmet movement ran for the offices from the ruling party, bu if there was another intention, more people might have been encouraged to do so.

He noted that the present atmosphere of “revolt, enmity, and hatred” cannot be extinguished quickly.

“Many honors have been downtrodden and the pride of many has been hurt. This cannot be restored that quickly. It may not be possible to put everything back into a state of harmony. But I have never lost my hope. I still believe that it will happen,” Gülen said about the recent events.

He recalled a letter he sent to President Abdullah Gül last month as a “step in that direction.”

He said Erdoğan was unhappy about the letter may be perhaps because it was addressed to the president as opposed to him or because it called on people in the media to stop smear campaign against the Hizmet.

Gülen said he believes there is a close circle around him who are misrepresenting matters to the prime minister. “Neither my heart, my conscience nor my tongue can tolerate saying that he is unstable or that he is in a state of paranoia. But I think this close circle is pushing him towards such disturbing things,” Gülen underlined.

Gülen said if he had a chance to say something about people’s voting behavior, he would encourage them to vote for whoever stands for the rule of law and rights, is upright and sound, whoever is respectful of democracy, who gets along with those around him.

‘I’m not against Kurdish settlement process’

Speaking about the recent settlement process aimed at ending decades old conflict between the PKK and the state, Gülen said the Hizmet movement supported the settlement process even before the government. He said he sent a letter to the prime minister, urging him to embrace the region by improving education, healthcare, religious affairs and security.

“I said that if you do not embrace these people, those who have been persecuted in the past will carry and grow their grievances into the future. But these views were not taken up,” Gülen complained.

Gülen categorically dismissed claims that he is against the settlement process, saying that the Hizmet movement’s method of bringing peace to the region could be different from that of government’s.

He said they believed that the conflict needed to be solved through education, gathering and unity as well as addressing the poverty in the region through investment. “In this respect, the allegations of the movement being against the peace process is slander, it is unfair portrayal, it is a form of aggression and attack,” the Islamic scholar stressed.

Gülen reminded that jailed leader of the PKK, Abdullah Öcalan, was once portrayed as a “terrorist” who was even sentenced to death. “But later on,” Gülen said, “I do not know the rationale but maybe as a plan for elections, there was an appeal to [PKK, Öcalan].”

He said Öcalan was unhappy with what the Hizmet movement was doing for the Kurdish people — with reading halls, the community centers; the things that were being done to prevent young people from joining the militants in the mountains.

He said the PKK and its Iranian and Syrian offshoots, PJAK and PYD, expressed their discomfort about the Hizmet’s activities, adding that they are unhappy with activities that seek to bridge gap between the Turks and Kurds.

Gülen said the Hizmet movement had not had adverse attitude towards the PKK, but its attitude is hostile against the movement. “In order to have good relations, to look nice to Kurds and to get their support in the elections, the current administration blamed everything on what they call Hizmet, community, or movement,” Gülen said.

He didn’t rule out negotiations with the PKK. “We see no harm in that,” Gülen said. But he said the talks should be done in a manner that maintains the dignity and reputation of the state.

He reminded his earlier statement, in which he encouraged a Kurdish TV channel that teaches the Kurdish language and for Kurdish to be taught as an elective lesson in state schools and at universities.