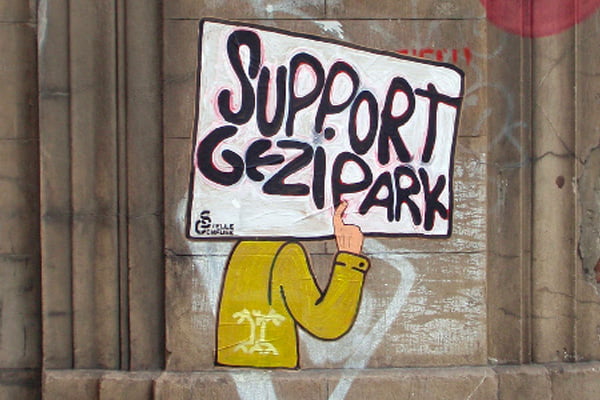 Turkish Islamic scholar Fethullah Gülen has urged that the protests that have gripped Turkey for nearly 10 days not be underestimated or ignored, adding that “we share the blame” for the unrest. Gülen also urged restraint and patience from his followers and said “our duty is to work to rehabilitate hearts.” Gülen frequently used “we” in a speech referring in particular to members of his movement, and repeatedly blamed his movement for not doing enough to eliminate problems Turkish society faces, especially on an ethical level.

He said that while trying to prevent one wrong, “fiftyfold more wrongs are being committed, sparking more rancor and hatred.” It was not clear to whom he was referring in that instance.

Gülen counseled that the protests should not be underestimated and said that if one claims that the protesters are not seeking their rights, then some of what he called their “innocent demands” would likely be ignored. He added that the initial protesters who gathered in Taksim’s Gezi Park last week in a sit-in protest to prevent construction workers from destroying trees could be seen as rightfully demanding the preservation of the ecosystem and green spaces. He branded their initial demands as “logical.”

But he condemned the subsequent violence and said the succeeding events showed that they sometimes could not “maintain the right balance.” He said throwing stones and burning public assets is “illogical and inhumane.”

Gülen noted that indifference and the inability to comprehend events could cause another problem on the other side; likely referring to the government, who most observers believe misread the protests.

During his entire speech, he rarely referred to specific events and generally spoke hypothetically.

Gülen said underestimating the negative developments could stem from problems in “judgment, mind and logic.” He likened the protests to an “invasion of ants” and said “don’t disregard them.”

“We need to act smart and see the smallest problems as very big and we need to handle them in a smart way,” he added. Gülen said some legitimate demands of innocent people are being exploited by some groups inside and outside of Turkey. He said the international media in the US, Europe and elsewhere is publishing stories “against Turkey,” referring to the fact the reports make Turkey look bad. He said the media also exaggerated events in the country as if “there is an apocalypse happening.”

Gülen also said, “We need to ask ourselves if we share the blame for all those kids involved in violence.”

Gülen said the cause of those kids involved in violence in the streets is not “right.” If their cause was just, they could have peacefully gathered in a square and asked for their rights.

Gülen pointed to the ballot box as a way to change governments and said they could have gone door-to- door and urged people to vote for their candidate in the next elections. “If they don’t like the candidate they elected, they can wait for another season and vote again,” he said.

Gülen also added that if one starts fire and war, it is sometimes difficult to stop it later, referring to the protests authorities had belittled. “The things we are experiencing now are no different from a fire,” he said. He advised authorities to use all tools at their disposal to “extinguish the fire when it is small,” referring to the unrest.

He stated that if innocent people are being killed, educational facilities are bombed, people are being choked with gas and some people remain blind to the background of these events, then the “fire could rage.”

Gülen also urged restraint and patience from his followers and said “our duty is to work to rehabilitate hearts.”