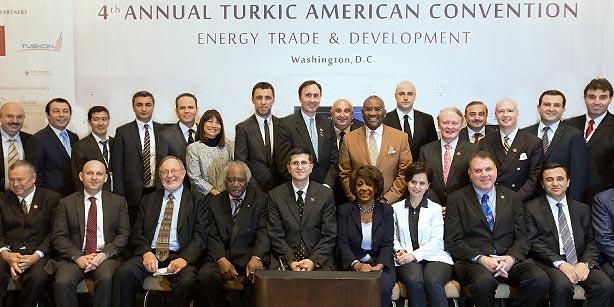 “Look how many of my colleagues from the US Congress were here this evening,” congressman Gregory W. Meeks from New York told the audience during the convention, referring to at least 43 members of the US Congress that made it to the event. “We don’t go to every place, not in these numbers. Not in [this] bi-partisan way; you see Democrats and Republicans [here]. … You brought us together,” he said.

The remarks by Meeks highlighted the significance of the event, which is held annually in the nation’s capital to bring together representatives from six Turkic nations. The convention, which was sponsored by Today’s Zaman, along with Turkish Review magazine, Azerbaijan’s İpek Yolu Association and the Turkish Confederation of Businessmen and Industrialists (TUSKON), has become a major venue for representatives of these nations to meet with people Inside the Beltway.

“You made the US a better place … by bringing your yearning for freedom and justice, and that made us a better place. We’re thankful for your contributions,” Meeks said, in an endorsement of the contributions of Turkic nations in the US.

The convention was kicked off with a reception on Wednesday, where members of the US Congress and local state senators expressed solidarity with Turkey and other Central Asian countries. Hakan Şükür, who recently resigned from the ruling Justice and Development Party (AK Party) in protest of the government’s misguided policies, also participated in the event, along with main opposition Republican People’s Party (CHP) deputies Muslim Sarı, Sedef Küçük and Engin Özkoç.

Dağı said for a society like Turkey, which is fragmented and comprises different ethnic and sectarian groups, there should not be any alternative to liberal democracy. He pointed how the Turkish people have gone back and forth to establish a functioning democracy in the past 150 years, adding that it is still far from a consolidated democracy.

Yılmaz, who is also a professor at Fatih University and known to be a vociferous critic of the government on television, said the 2010 referendum on constitutional changes that made it impossible for the Constitutional Court to shut down political parties, halting military tutelage and the 2011 parliamentary elections have made the ruling AK Party an uncompromising political force determined to establish its own regime.

Senator Kirsten Gillibrand hailed the Turkish community in the US, saying that she hopes Turkey becomes a model for freedom and transparency in the region given the turmoil in the Middle East.

Pete Olson, a congressman from Texas, recalled that various people in the audience have been unfairly blamed for some of the problems, saying, “If people don’t say bad things about you, you did something wrong.”

Representative from Florida Debbie Wasserman Shultz raised concerns about the Turkish democracy and the independence of the judiciary, stressing the importance of freedom of speech. Despite turbulence in its politics, she said Turkey continues to be a strong US ally in the face of problems in Syria and in other parts of the Middle East.

The remarks by members of the US Congress on Turkish politics came days after Turkish Prime Minister Recep Tayyip Erdoğan’s ruling party won local elections and he vowed to crush his critics as his government has been strengthening its foothold in key public institutions in addition to subduing the judiciary under its control with a controversial law.

No official from Turkey

Not one Turkish official or diplomat attended the event, which is considered to be the most important gathering for Turkey in Washington, highlighting the Turkish government’s indifference as it struggles to contain a recent corruption scandal with a series of moves critics claim are “anti-democratic and repressive.”

TAA’s convention is only the fourth of its kind and despite this fact, dozens of members of the US Congress participated in the two-day event, a rare situation that was branded as an “exceptional success” for the Turkic community in Washington, D.C. The Turkic American Alliance could bring together 59 members of the US Congress last year, and a last minute voting in the Hill on Thursday forced more than 20 representatives and senators to cancel their participation. For a Turkish community in the US that has been deeply divided and weakly organized only until recently, the convention illustrates the growing strength of Turks and other Turkic communities in the capital.

Faruk Taban, president of the TAA, said he believes everyone appreciates the friendship and the collaboration the gathering provides among Central Asia, Turkey, Azerbaijan and the US.

He thanked the members of the US Congress who came to “salute the friendship between Turkic nations and the US,” adding that the alliance is planning to hold similar state-level meetings in at least 48 states this year.

As the Turkish community intensified in its efforts to build dialogue with Americans, visits to Turkey have become key in building and maintaining this relationship in the past decade. Taban said his organization alone has taken more than 4,000 American public figures to Turkey in the past seven years.

Reinforcing Taban’s remarks, congressman Al Green in his speech during the convention said friendship is better than partnerships and “relations and friendship hold people communities together despite political unrest and economic ups and downs.”

Another congressman, Hakeem Jeffries, praised Turkish schools in New York. “Turks are hardworking, their familial and moral values are powerful and they are a nation which has no problem in adapting to the community in which they live,” Jeffries said.

Congressman Robert Aderholt confirmed the great support of the Turkic community in the US Congress by pointing to the strong presence of US lawmakers in the convention. He said Turks have got a big political backing and urged the Turkish community to do whatever they have been doing. “You’re doing a right thing,” the congressman said.

Chairman of TUSKON, which is one of the main sponsors of the gathering, Rızanur Meral, told the audience that anti-democratic practices in Turkey have sent a negative signal in terms of investment and economy in Turkey.

He criticized the government for purging members of the police and judiciary in the hope of containing the corruption investigation that implicated dozens of businessmen and sons of three ministers. He added that the removal of officials is being monitored by the international community and businessman with concern.

He said actions that curb the rule of law in the country shake the confidence of businessmen investing in Turkey, adding that free and fair elections are impossible after putting tight controls over communication channels, banning social media sites and threatening independent media.

He noted that the trade between the US and Turkey increased 50 percent in the past five years and recalled that TUSKON held meetings in New York, Washington, Houston, Chicago, North Carolina, Missouri, Arkansas and California in a bid to boost and improve trade between the two allies and seek investment opportunities.

Economy professor Şebnem Kalemli-Özcan from the University of Maryland raised concerns about Turkey’s ballooning current account deficit and warned against inflation seeing double-digits. She said alarm bells are ringing as Turkey’s foreign debt is increasing, urging the Turkish government to speed up the process to close the gap between Turkey’s imports and exports. Özcan said it is too early to talk about how the recent corruption investigation has affected the economy, adding that figures might be worse in upcoming economic indicators.