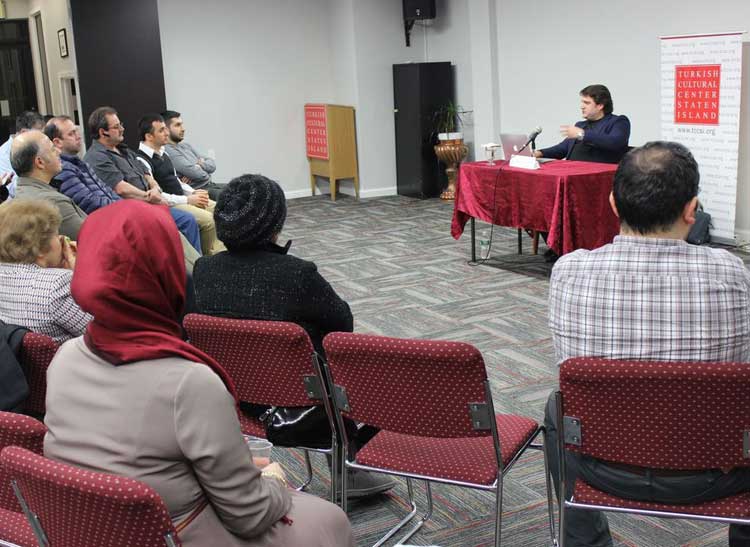 He was the guest speaker during an event titled “Democracy and Freedom of the Press in Turkey,” which explored the nation’s long and difficult history with the media – a relationship that has often included extreme censorship.

Vatandas declared: “Respected institutions in the world, like Freedom House, have been saying this, but let me also say: Freedom of expression in Turkey has hit a new low.”

The investigative journalist said Turkey’s strained history with the media traces back to the country’s roots as part of the Ottoman Empire, which reigned until 1923. He said even back then the media was censored, with government officials often preventing freedom of the press or using the media for their own purposes.

That censorship continued through World War I and World War II, and while there were brief points where freedom of reporting was encouraged, the lockdown on the media continues to this day under current Prime Minister Recep Tayyip Erdoğan.

Vatandas said Erdogan has control of the country’s biggest news channels directly and threatens others, leaving him with indirect control over those as well.

He said Erdogan also indirectly controls the Demirören media group, which includes the Milliyet and Vatan dailies. The total circulation of these two newspapers is about 262,000 on daily basis.

While these two newspapers have only 5.5 percent of the entire circulation in the country, they have the most visited web news sites in Turkey.

He noted censorship of the media has led to imprisonment of Turkish journalists, such as prominent investigative reporter Mehmet Baransu.

Baransu, whom Vatandas has worked with, disclosed plans for a coup in 2010 in a story he wrote. Even so, he has been imprisoned now without any legal basis.

“He was a hero five years ago and he was no threat, but when the situation changed … he is now in jail because of stories he wrote,” said Vatandas.

He added Turkish journalist and television personality Sedef Kabas had recently tweeted a comment about prosecutors dropping charges in an investigation of a high-ranking Turkish official. “Because of that tweet police officers came to her home and detained her,” said Vatandas. “Her case is still going on.”

Citing Turkish novelist and Nobel Prize winner Orhan Pamuk, Vatandas said: “I have never seen any country where so many journalists are being fired … even the journalists who are closest to the government….

“Everybody is frightened. People want to say some things, but fear being fired. This is not normal. The pressure makes those who speak boldly more important. Courage comes to the fore, rather than creative thinking.”