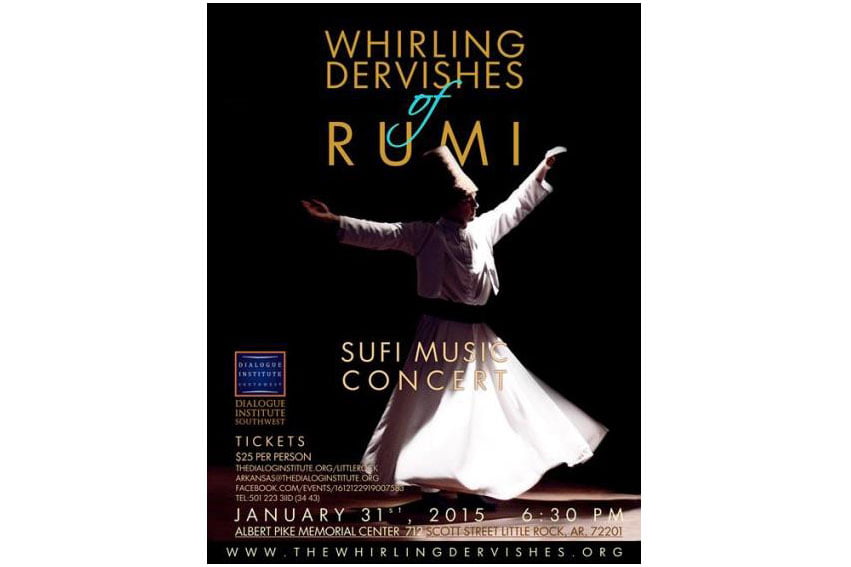 Dialogue Institute of the Southwest presents Whirling Dervishes of Rumi…

Do not miss this opportunity to see the Whirling Dervishes live!!

There will be two performances in Arkansas. tickets are available at Eventbrite. Please click here to purchase your tickets now:

This Great Love Inside Me
I am so small I can barely be seen.
How can this great love be inside me?

Look at your eyes. They are small,
but they see enormous things.
(Mawlana Jalaleddin RUMI)

The Whirling Dervishes Performance and Sufi Music Concert will be held in Little Rock as a part of a tour on January 31, 2015.
For more information please click: www.thewhirlingdervishes.org
Sufism (tasawwuf) is the path followed by Sufis (adherents of Islamic mysticism) to reach the Truth—God. While this term usually expresses the theoretical or philosophical aspect of this search, its practical aspect is usually referred to as “being a dervish.”
Mawlana Jalaleddin Rumi was one of the great spiritual masters and poetic geniuses of mankind, and the Mevlevi Sufi order was founded to follow his teachings. He was born in 1207 in Balkh to a family of learned theologians.

The Whirling Dervish Performance of Rumi is a highly cultural and spiritual celebration of existence, performed by members of a branch of the Sufi order, which was founded in the 13th century in the Turkish city of Konya. The Whirling Dervishes played a vitally important part in the evolution of Ottoman Empire high culture. From the 14th to the 20th century , their impact on classical poetry, calligraphy, and the visual arts was profound, while music was perhaps their greatest achievement.

Sufism emphasizes universal love, peace, acceptance of various cultural and spiritual paths. The Whirling Dervishes performance starts with an introductory speech about Rumi, followed by Sufi Music and the whirling dervish ceremony. They will give life to 800 years of cultural tradition on the stage with their determination and faith for being lifelong followers of Sufi tradition. The Whirling Dervishes of Rumi is a great cultural experience that every Arkansan need to witness.

Source: Dialogue Institute of the Southwest