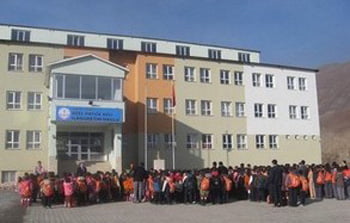 Schools opened by the Gülen movement, inspired by internationally respected Turkish scholar Fethullah Gülen, in the eastern province of Hakkari are often threatened by the terrorist Kurdistan Workers’ Party (PKK), according to an interview by the T24 news portal.

The portal interviewed a follower of the movement in the province but declined to give his name due to security concerns. The interviewee said the Gülen movement first opened an educational institution, a dershane (lesson-house) in Hakkari in the 1993-94 school year. Students attending a dershane pay for extra lessons outside of their regular school curriculum.

“Troubles in the province reached their peak during those years. Prominent figures of the [Gülen] movement traveled to the region to see what could be done to improve education there. But they concluded that the required atmosphere for establishing a school in Hakkari did not exist. This is when they decided to take the first step to improve education there and opened a dershane. That’s how the Fem and Anafen dershanes, which are still active in Hakkari, were opened,” he noted.

He also said the first private school the Gülen movement in Hakkari was opened in 2007. There are currently 300 students at the school, Hatice Avcı College, and the school’s dormitory accommodates around 100 students, both boys and girls.

According to the interviewee, 80 percent of students at the school come from families that are originally from Hakkari, but the number of students started to decrease after the PKK recently threatened the lives of families sending their children to this school.

The terrorist PKK planted a percussion bomb in the dormitory of the school on Sept. 14, which damaged the building’s walls and windows and frightened students and their families.

Following the recent release of a video clip posted on the website of the pro-Kurdish ANF news agency, some families told the school administration that they no longer want to send their children to the school due to security concerns. In the clip, the PKK said, “Whoever sends his child to this school will become a PKK target.”

The interviewee said the recent PKK threats have led to a decline in the Hakkari school’s attendance. “The school was growing more and more popular among locals. In 2007, when the school was first opened, there were only 70 students. The following year, this figure rose to 150, and then to 300.”

The interviewee stated that followers of the Gülen movement asked for protection from police after being threatened by PKK members. “The police, however, advised them to carry guns. Let’s be logical. What happens when a Gülen movement follower carries a gun for self-protection and uses it in the event of a real danger? Turkey will be outraged! Everyone will say a movement follower has killed a man. This will pave the way for claims that the movement is engaged in illegal activities,” he stated.

He also said many officials in Hakkari, whether it be the governor or the police chief, say that it is the Gülen movement and its followers who stand firm against the terrorist organization. “They ask us not to bow to the PKK. Otherwise, they say, the nation will be lost in despair,” he added.

According to the interviewee, the PKK has close relations with locals in Hakkari, and almost every Hakkari resident has a family member or relative who has joined the terrorist group.

“Let me give you a striking example. It had a big impact on me when I heard it. A Hakkari resident who used to work for the Gülen school in the province said he was shepherding in the summer months. While resting on a mountain once, as his sheep grazed, he saw men coming from the top of the mountain. They were PKK members, and they were coming to visit him. He immediately killed one of the sheep and cooked it for the terrorists. They all ate together. Then they left. A few months later, he saw one of the terrorists at a grocery store in the city.”

He added that terrorists often visit the city when they want to eat döner, a fast food made with lamb, beef or chicken.

The interviewee denied claims that Gülen schools offer “exclusive training” to students to attract more followers to the movement. He said many graduates prefer to return to their hometowns to serve their community after having completed their higher education. “For example, a doctor I know in Hakkari attended a Gülen primary school. He then went to Van to attend a high school. He studied medicine at a university in one of the western provinces. And years later he returned to Hakkari to serve his people.”

South African Science and Technology Minister Naledi Pandor has praised Turkish schools operating in her country for helping to break the anti-black taboos of the nation’s defunct apartheid regime.