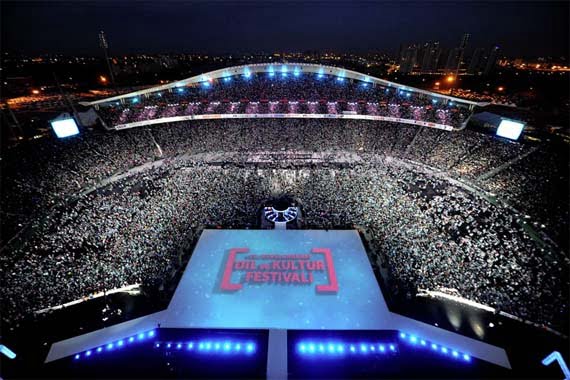 A spectacular closing ceremony at İstanbul Atatürk Olimpiyat Stadium in front of 200,000 spectators for the 11th Turkish Language Olympiads has left bittersweet memories, signaling the end of a two-week festival full of poetry, dance, Turkish culture and music.

Participants, who came from 130 countries, in this year’s competition wrapped up the two-week long finals that were held across Turkey in İstanbul, with Prime Minister Recep Tayyip Erdoğan also in attendance, praising organizers and congratulating students.

In address to the audience, Erdoğan slammed violent protesters amid approval roar of thousands of spectators. He said the ‘real Turkey’ representing the most parts of Turkey gathered at the stadium.

Praising the organizers of the event and thousands of Turkish teachers who contributed to spread of use of Turkish as a global language abroad, Erdoğan said the struggle is for reaching world peace.

He also hailed Fethullah Gülen movement, a faith-based social movement that focuses on education, inter-cultural and inter-faith dialogue, for its contribution to world peace.

President Recep Tayyip Erdogan has suspended nearly 13,000 police officers over suspected links to Fethullah Gulen, the U.S.-based cleric Turkey says is responsible for the July 15 coup attempt. Erdogan’s critics believe he has used the coup as an opportunity to crack down on his political opposition. Erdogan was often accused of trying to silence critics.