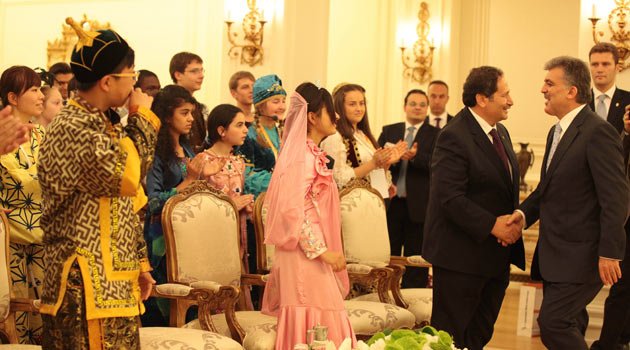 In this 2011 photo, President Abdullah Gul greets Seref Ali Tekalan, rector of Fatih University, which was closed down during the anti-Gulen crackdown.

Former Turkish President Abdullah Gül answered 27 questions sent to him by the parliamentary Coup Investigation Commission, while current President Erdogan, Chief of Staff Hulusi Akar and National Intelligence Agency head Hakan Fidan were not questioned although they were directly affected by the attempted coup.

In his answers, Gül denied having relations with neither the Gülen movement nor Fethullah Gülen. But, history tells the opposite: Gül attended many activities of the Gülen movement; he even hosted, in his official residence, students of Turkish schools from many countries during a Turkish Language and Culture Olympiad in 2011.

In a video available in the internet, Gül is seen attending to the opening of Bank Asya, an Islamic lender established by sympathizers of Gülen, in 1996 along with Gülen current President, then-mayor of İstanbul Recep Tayyip Erdoğan and then-Prime Minister Tansu Çiller.

When hosting the students from Gülen-inspired Turkish schools President Gül in his speech praised these initiatives and said: “This is (the schools) a great service to Turkey, Turkish language and culture.” He was also bestowed with “Karamanoglu Mehmet Bey Turkish Language Award” by the organizing committee of the Olympiad.

It was not clear why President Gül gave a statement as if he had been unaware of the Gülen movement. Once, it was even perceived and circulated in the media that that he was a follower of Fethullah Gülen.

President Gül attended many activities of the Gülen movement in Turkey and abroad. Below are some of them: