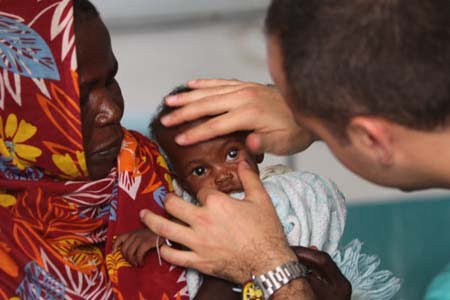 A Kimse Yok Mu ophthalmologists Ferruh Bican revealed that 53 volunteer doctors brought light to the blind by performing a total of 80 thousand eye exams and over 12 thousand cataract surgeries in Darfur, Somalia.

The president Aytug, in his remarks, said that KYM lends a hand to the sufferer worldwide and answers “We are here for you” to those crying out “Anybody out there?” Tulunay, as well, noted that they join the modest donations of the public and deliver aid to those in need both at home and abroad. “Last year, we assisted 2,345 families in Denizli and distributed monetary aid worth about 1 million 260 thousand Turkish Lira” Tulunay said.

Next, the volunteer Ferruh Bican briefed on the cataract surgery campaign that the foundation launched in Africa. Referring to a survey result which showed that the most feared disease in the world is blindness above cancer, “According to statistics, cataract makes up 51% of among causes of blindness. The number of cataract sufferers is estimated to be around 6 million in the continent Africa.” Bican said. Underlining the fact that Africa has been a synonym for poverty so far, he said, “If explored a little closer, it turns out that it is not the case at all indeed. Africa owns very rich underground reserves. That’s why the peoples of Africa, dragged from one war into another by various conspiracies and under imperialists’ colonial rule, became slaves of the contemporary world due to provoked conflicts. Moreover, they were engulfed in desperation and desolation as cataract-caused blindness too struck them along with famine, poverty. They lost their faith in white men completely. The Darfurian black pearls, who came to our rescue during Canakkale Wars, came to a point to question if there’s anyone considering them human beings.”

As Bican said, a volunteer Kimse Yok Mu team, having learned that, since 2008, over 2 million people have been faced with blindness due to cataract disease, set out with their medical equipment for Darfur region of Sudan. “The volunteers started out repairing the clinic allocated to them. When everything was finally set, only a few people showed up after days of waiting despite thousands with cataract in both eyes. They were right to fear and avoid as white man had never given anything so far but taken away. When the eyes were restored to sight following the first surgeries they joyfully expressed their thankfulness. Maybe, white man didn’t take away anything for the first time but gave away expecting nothing in return. As days went by, they flooded into the clinic. So we had to put “The blind in both eyes only are operated on one eye” on the door.

Bican stated that the opening ceremony of Darfur eye operation theatre by Kimse Yok Mu was held in Eid al-Adha in 2008. He further said, “The chief physician who initially observed our preparations from a distance as he was suspicious of us, white men, later commented that ‘ Whenever we feel suffocated and in need looking for someone for help on this world, we’ll say we have our Turkish brothers and sisters from now on. We will also look for help in afterlife and then our deeds will come for rescue.’ A lot has changed in Darfur since 2008. 53 volunteer doctors brought light to the blind performed a total of 80 thousand eye exams and over 12 thousand cataract surgeries. A lot has been achieved by involvement of Kimse Yok Mu volunteers and philanthropists in such a very short period of time in Africa. To heal more cataract sufferers our foundation expanded to seven more African countries. These services are being done thanks to nothing but wholehearted donations flowing in from Anatolian people. You can bring light to one’s eyes too by simply donating 100 dollars. We briefed Denizli Governor Abdulkadir Demir on the campaign. He gave his donation too. The province Denizli finances 10% of the cataract campaign. We encourage every able person to contribute.”

Source: [in Turkish] on Cihan, 30 March 2013. English translation is retrieved from HizmetMovement.Com