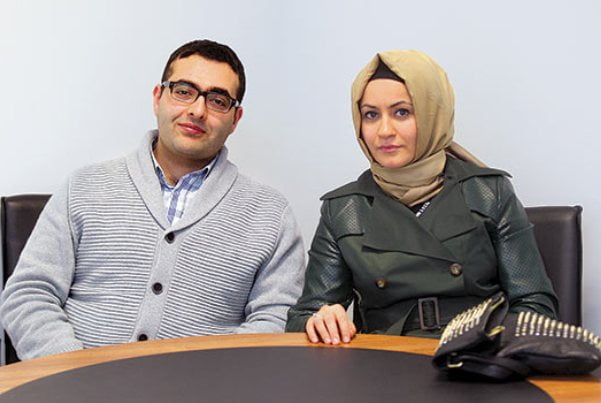 Mahir Zeynalov, a journalist for Today’s Zaman, left Turkey for his native Azerbaijan on Friday morning following a government decision to deport him for posting tweets deemed critical of the government.

Zeynalov was accompanied by his wife, a Turkish national, and escorted by police as he left the country. He elected to return to Azerbaijan due to his family’s concerns, but plans to relocate to a third country — likely to New York City — after making the return home.

A formal deportation procedure took place after Zeynalov arrived at İstanbul’s Atatürk Airport to board a 9:15 a.m. flight to Baku, after which he and his wife were accompanied by police to their flight.

Zeynalov has been put on a list of foreign individuals who are barred from entering Turkey under Law No. 5683, because of “posting tweets against high-level state officials,” Today’s Zaman learned. The decision, dated Feb. 4, is signed by Deputy Police Director Ali Baştürk on behalf of the interior minister.

The move comes in an already-troubling atmosphere for media freedom. Late on Wednesday, Parliament passed a controversial bill tightening government control over the Internet in a move that critics say is aimed at silencing dissent.

The decision to authorize the deportation of Zeynalov came after an application to the Prime Ministry’s Coordination Center (BİMER) that “statements contrary to the facts” were being made on the Twitter account @mahirzeynalov. That application was followed by a formal request to police intelligence to identify the owner of the account, and the intelligence unit discovered the account’s owner to be Zeynalov. The decision to deport Zeynalov and ban his entry into Turkey came following the verification that the account in question belongs to Zeynalov.

Zeynalov is already the target of a criminal complaint filed by Prime Minister Recep Tayyip Erdoğan for tweets he posted on Dec. 25, 2013, about a graft scandal that shook the government last year, as Erdoğan says the tweets included “heavy insults and swear words in a bid to provoke the nation to hatred and animosity.”

Zeynalov, in formal testimony given about the accusations last week, denied the charges of attempting to “incite hatred and animosity” among the public, noting that he had only tweeted links to two news reports that included no opinion or criticism.

The first tweet contained a link to a news report about the second wave of a massive graft operation and the police’s obstruction of a raid involving more than 40 suspects, including Saudi businessman Yasin al-Qadi — who is on the US list of Specially Designated Global Terrorists. Turkish media close to the government immediately launched a smear campaign, accusing Zeynalov of “trying to portray Erdoğan as protecting al-Qaeda members” to the world.

The government’s draconian measures to expand government control over the media have elicited criticism from the opposition at home, the European Union and international media freedom watchdogs.

In a report released on Monday, Freedom House said the Turkish government has failed to resist the temptation of authoritarianism embedded in the state and has applied strong-arm tactics to suppress the media through intimidation, mass firings, buying off or forcing out media moguls, wiretapping and imprisonment, “which are not acceptable in a democracy.”

According to the report, editors and reporters from across Turkey’s media have told Freedom House about “angry phone calls from the prime minister’s office after critical stories run, and of media owners being told to fire specific reporters. In a growing number of cases, editors and owners are firing reporters preemptively to avoid a confrontation with government officials.”

Just this week, a voice recording available on YouTube revealed that Erdoğan gave phone instructions last summer to a senior executive of the Ciner Media Group, to which Habertürk news channel belongs, to stop a news ticker on Habertürk which the prime minister considered unfavorable. In the news ticker, opposition Nationalist Movement Party (MHP) leader Devlet Bahçeli called on President Abdullah Gül to intervene and decrease the tension during the Gezi Park protests, which rocked the country at the beginning of last summer.

In a further indication of government interference in the media, allegations have recently surfaced that the government instructed businessmen who had won major public tenders, including one for the construction of a third airport in İstanbul, to contribute money to a fund to buy the Turkuvaz Media Group that owns, among other media, the ATV television channel and the widely circulated Sabah daily.
Troubles for foreign journalists

Zeynalov’s case underlines the hardships faced by foreign journalists based in Turkey. Foreign journalists can work and obtain a residence permit in Turkey after obtaining a press visa from the Turkish embassies in their home countries and a press card from the Prime Ministry’s Directorate General of Press and Information (BYEGM).

Zeynalov, who has held a press card for the past four years, said he has applied to the BYEGM this year for the annual renewal of his press card. He has been told by a BYEGM official in İstanbul that the İstanbul office had received a notice from the BYEGM headquarters specifying that the BYEGM, using its discretion, is refusing to renew his press card.

Zeynalov has a residence and work permit valid until March 10, 2014. Zeynalov, who has been married to a Turkish woman for 15 months, would be eligible for Turkish nationality in three years.

Similar problems also affected Dutch journalist Bram Vermeulen last year. It emerged that the Dutch journalist appeared to have been put on blacklist after his press card was not automatically renewed. He said he had also been told that he would not be able to enter Turkey, even on a tourist visa, due to security concerns. His legal problems, however, were quickly fixed after his story made it into the Turkish and international media and sparked a wave of criticism.