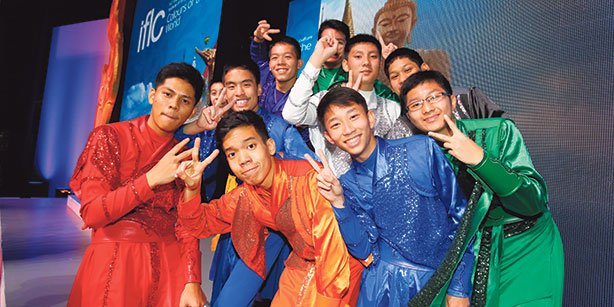 Students from 21 countries attended the IFLC, held at the Thailand Cultural Centre in the country’s capital of Bangkok. (Photo: Cihan)

Students from 21 different countries including Maldives, France, Kyrgyzstan, the Philippines, Myanmar and Vietnam participated in the program where they performed musical numbers.

The program was organized by Turkish schools operated by Marmara Schools and supported by the Thai National Education Ministry and the National Culture Ministry, as well as the Tourism Authority of Thailand.

Prior to the IFLC, the students of the Marmara Schools participated in writing, photography and drawing competitions where they illustrated what universal peace means to them.

Pansaya Peach, a finalist from season five of Thailand’s Got Talent, sang in the local language. She also performed a dance with a group of nearly 50 students to exhibit traditional Thai dances.

Thai leaders such as Agriculture Minister Counselor General Prasart Sukkaset, the former Air Force commander, the commander of the Air Force Academy along with various diplomats were among the attendees.

The program was nearly two hours long, and was broadcasted live through Periscope. The program ended with the singing of a song titled “Universal Peace.”

Later, a dinner was held with the students and teachers of schools from across the globe on a 41-meter-long boat on the Chao Praya River.