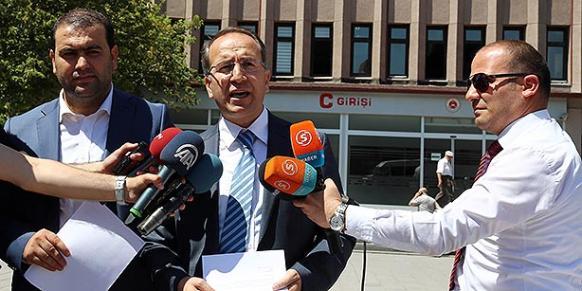 In his 13 point appeal, Albayrak stated the reasons why both the methods and the decision to issue an arrest warrant were against the law, underlining the fact that the warrant was issued despite the fact that Gülen was never called on to give testify and the fact that his address is known.

In December, the İstanbul 1st Penal Court of Peace issued an arrest warrant for Gülen and requested that the scholar be extradited from the United States, which is seen as a step toward an Interpol Red Notice and ultimately extradition from the US. However, US law requires that the crime be recognized in both countries’ jurisdictions and that the offense not be political in nature.

The ruling Justice and Development party (AK Party) government has asked for the extradition of Gülen from the US several times since two major graft operations incriminating the inner circle of then-Prime Minister Recep Tayyip Erdoğan and his family went public on Dec. 17 and 25, 2013. The government received negative replies from the authorities in America, due to a lack of charges. President Recep Tayyip Erdoğan also personally asked US President Barack Obama to “deport” Gülen.

Albayrak stated that the court case which resulted in the issuing of an arrest warrant for Gülen, known as the “Tahşiyeciler” case, is ongoing. “Starting a new case based on the evidence of an ongoing case is a phenomenon that has never been seen nor will it ever be seen in the realm of law.”

According to Albayrak, the Code on Criminal Procedure (CMK) states that there must be “strong criminal suspicion and a reason for the arrest,” if an arrest warrant is to be issued, underlining that it is unclear what the criminal suspicions against Gülen consist of. Another one of the reasons why Albayrak states the decision of the İstanbul 1st Penal Court of Peace to issue an arrest warrant for Gülen is unlawful is due to the fact that the court case against a group known as “Tahşiyeciler” is continuing, emphasizing that evidence from an ongoing court case cannot be used to begin another investigation.

The extradition pleas were even voiced by President Erdoğan himself; however, the result has until now always been negative. However, in the most recent attempt to extradite Gülen from the US via the police operations on independent media on Dec. 14 last year, when the editor-in-chief of the Zaman daily, Ekrem Dumanlı, was detained alongside the general manager of the Samanyolu Broadcasting Group and many journalists, TV producers and even scriptwriters. The charges placed against these prominent media personnel resulted in the İstanbul 1st Penal Court of Peace issuing an arrest warrant for Gülen, who resides in rural Pennsylvania in the US, in self-imposed exile since 1999.

In his appeal, Albayrak cites the CMK, Article 98, which states that arrest warrants can be issued for those suspects who do not come [to give their statements] and those who cannot be reached. Albayrak stated that there has been no such call to Gülen even though his address is known; Albayrak added that according to bilateral agreements with the US, it is possible for US authorities to take Gülen’s testimony at his address if a summons is made, citing statements taken from Gülen’s address during the Feb. 28, 1997 coup era.

Highlighting that Gülen has never been a proponent of violence at any time in his life, Albayrak’s petition stresses that the sermons of Gülen or the books he authors have no criminal aspect to them. Albayrak also underlines that charges that Gülen has formed an organization trying to change the regime of the state are baseless.