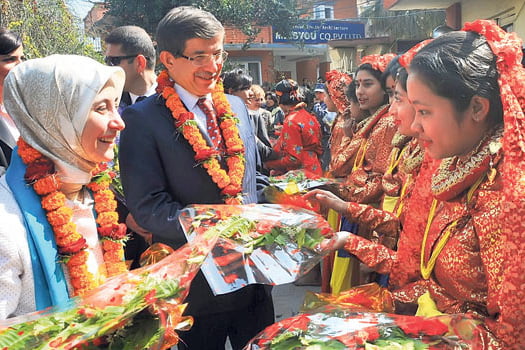 Foreign Affairs Minister Ahmet Davutoglu is with students at the Turkish School in Kathmandu, Nepal

Ahmet Davutoglu the first Turkish foreign secretary who went to Nepal visited Meridian Turkish School. Davutoglu addressed to the students in Turkish school and said that: “My first visit to Nepal was in 1993. If someone had told me that a Turkish school would be opened in Kathmandu,

the students in that school would learn to speak Turkish and would sing Turkish songs, I would think that it would be only a dream. But now I see that these devoted Turkish teachers realized that dream and I’d like to thank to all of the teachers”.

Source: The original news was published at Zaman Newspaper in Turkish on February 18, 2011. IDC members translated.

A conference titled “Ideal Human & Ideal Society in the Thoughts of M. Fethullah Gülen,” seeking to extensively discuss the various dimensions of the Turkish Islamic scholar’s perspectives over an ideal society in a tumultuous time, will kick off on Tuesday in Lahore, Pakistan. In a press conference held at the University of the Punjab […]