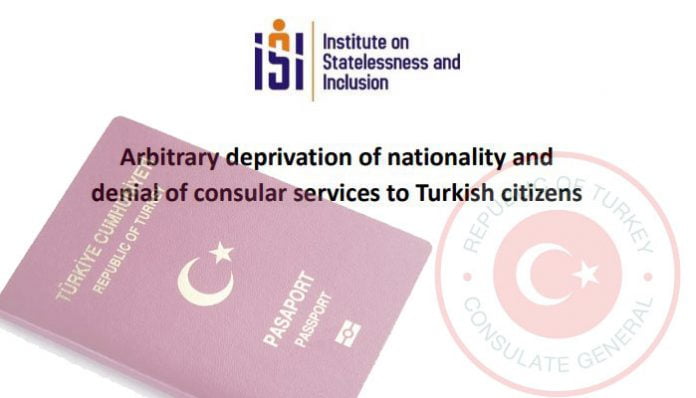 Seventy-six babies have been born stateless in the last three months because Turkish diplomatic missions are denying consular services to people allegedly linked to the faith-based Gülen movement, which is accused by the ruling Justice and Development Party (AKP) and President Recep Tayyip Erdoğan of masterminding a failed coup in 2016.

According to a report released by the Netherlands-based Institute on Statelessness and Inclusion (ISI) on Monday, Turkish embassies have refused to issue passports and identification cards to 76 newborns due to their parents’ alleged links to the Gülen movement, which runs a global network of schools, dialogue institutions, charities, media organizations and businesses that are not linked to each other through a central or formal organization but are loosely organized by people inspired by the views of US-based Turkish Islamic scholar Fethullah Gülen.

Other than denying passports to 76 infants, Turkish consulates have also refused to provide consular services 695 times, confiscated 19 passports and restricted the travel rights of 10 Gülen followers in the last three months.

“The deprivation of nationality is the act of an individual being stripped citizenship by their state, severing the legal bond with the state and annulling the rights that were once held as a citizen. International human rights law prohibits the arbitrary deprivation of nationality. The actions of the Turkish authorities exacerbate a growing international trend in which an increasing number of states (threaten to) deprive their citizens of nationality on the stated aim of protecting ‘national security’,” the ISI report said.

While the full extent of this denial of services to Gülen followers is not known, ISI noted that “this appears to be a growing problem.”

Recommending steps for an international community response to the Turkish government, ISI suggested that governments not deport alienated Turkish citizens to Turkey, where they risk being subject to severe and irreparable harm or persecution.

“Such deportations may contravene international obligations under the principle of non-refoulement,” ISI said.

ISI said governments must also consider granting refugee status to Turkish citizens who have been issued summons under Turkish government decrees or denied consular services, where such individuals face the threat of persecution.

President Erdoğan earlier called on foreign governments to punish Gülenists in their own countries. Only a few countries, including Saudi Arabia, Malaysia and Georgia, seem to have complied with the request so far.

The AKP government puts the blame on Gülen for the July 15 coup attempt, a claim strongly denied by the scholar. Since then, Turkish authorities have launched a massive crackdown on the movement in Turkey and abroad.

A report by TurkeyPurge.com on Saturday showed that more than 146,000 people lost their jobs, some 169,013 faced legal proceedings that left over 125,000 detained and 55,000 in pre-trial arrest and that at least 520 children are accompanying their parents in jail, as part of a government crackdown following the failed coup.

The government has also confiscated the properties of hundreds of companies and arrested leading businessmen over suspected links to the movement.