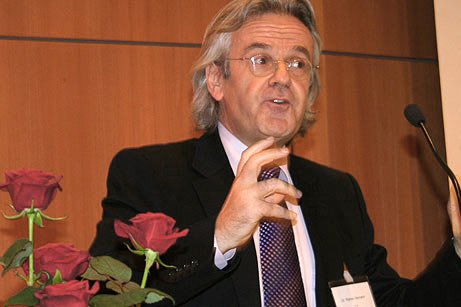 There is no obstacle to democracy in Islam, says Fethullah Gulen. However, even democracy needs a metaphysical dimension. As there are Christian, Jewish and Buddhist democrats, there could also be Muslim democrats.

Western World is disputing with Islam. Muslims also have some responsibility for this attitude: the Taliban is practicing the ‘stoning sentence’ and burning the schools for girls; al-Qaida claims Islam as a support for terrorism. On the other hand, like in Christianity, there are different interpretations in Islam but the West carelessly speaks about a single Islam. This problem will not be resolved until Muslims resolve their own issues and West meets with the different interpretations of Islam that has developed around the world.

One of such interpretations is the Turkish Islam. No other country with Muslim population embraced secularism as one of the fundamental principles of the state. Unlike Egypt and Algeria, Islam always remained a peaceful faith in Turkey. Turkey is Fethullah Gulen’s country. Gulen, who is called ‘Hodja Efendi’ by his sympathizers, is an inspiration for people in Turkey and abroad. Gulen Movement is an apolitical, social movement.

West cannot dispose of the incorrect conception that Islam is demanding a political order based on sharia. However, there have always existed movements in the Islamic world, that are spiritualistic and humanistic in essence and that don’t interfere with politics. Gulen Movement is an impressive such example today.

The privileged Kemalist executives believed in the principle that every religion that goes out of personal space becomes politicized and drags the society and state into a religious system. For this reason, Turkey’s main principle secularism, as in the French tradition, bans religion in public space. This is not secularization. Gulen, on the other hand, moved religion into the public domain as a social power. Gulen was also able to create a Muslim identity compatible with democracy and pluralism.

The urban elite governed the country since the foundation of the Republic. Members of bureaucracy, army, judiciary, and some intellectuals became the power centers in the country; the political wing was the the People’s Republican Party (CHP). Sociologist Nilufer Gole calls this coterie “White Turks”. White Turks intended to transform the society with an enlightened despotism. The Kemalist principles, called ‘the Six Arrows’, set the rules of the game. History of the Republic is actually the history of objections against these principles. Migration from rural areas to cities reached its peak in the 1970s. A new middle class emerged from these ‘Rural Muslims’. Gole calls this group ‘Black Turks’. Some of the Black Turks are in search of a change in politics; their party is the AK Party of Recep Tayyip Erdogan. The remaining members of the Black Turks started a search for social action outside the politics. Gulen is the preacher of this second group.

More than 20 years ago, Gulen started expressing that Islam was not an obstacle for democracy. Even AK Party members consider themselves to be not Islamic but conservative democrats. Gulen’s values create a culture of dialogue and tolerance. Gulen is a modern Muslim in search of a synthesis between Islam and science, and between Turkish culture and Western civilization.

One of the values Gülen represents is spirituality. This preacher’s values, which are inspired by Turkish Islam’s sufi tradition is not principally different from Christianity; one’s devotion to God and being ready for altruism for public benefit… Then comes a fresh morality. Gulen, who calls his followers to adopt a moral value based on lifelong learning and efficient endeavor, formed the basis for the ethics described by Socialists as ‘Islamic Calvinist work ethics of the new rural middle class’. This is not much different than Max Weber’s Protestant Ethics. Striving becomes a high-level form of worship. Next is the progress in science. Gulen lays emphasis on scientific education, because Gulen sees the education as means to understanding the creation, and advancement of mankind, thus achieving prosperity. And support for democracy as the political framework: There is no obstacle to democracy in Islam, says Gulen. However, even democracy needs a metaphysical dimension. As there are Christian, Jewish and Buddhist democrats, there could also be Muslim democrats. He thinks that the protection of individual rights and the community’s modernization is only possible through democracy. He believes that peace can be achieved provided that diversities are accepted as gains. Only such tolerant perspective can keep the pluralistic democracy alive.

Finally, another fact emerges spontaneously: the rejection of terror. Gulen states that ‘legitimate goals’ can only be achieved by using ‘legitimate tools’, and he also states murderers neither will go to heaven nor will they earn God’s pleasure- without bending the words.

Gülen movement is a loose network formed by the new middle class. Common denominator is not a membership to an organization but commitment to the whole set of values. A person can be inspired by Gulen’s ideas on his own and can start a school or an education center. That is why this movement is called ‘Volunteers Movement’. Activities are not secret or hidden. Their agenda includes 3 open items: education, dialogue and the press. Gulen sympathizers have opened more than 500 schools in Turkey and abroad. A contemporary curriculum is applied in schools.

Not until long ago, Turkey was a divided country with not much dialogue between different ideological groups. However, a lot has changed in recent years. It cannot be said that the improvement is only due to Gulen’s efforts, but he definitely has significant contribution to change. Fethullah Gulen is modern Islam’s preacher.

(Dr. Hermann, Islamic research expert; author of the book “Where Is The Turkish Society? Culture Clash In Turkey”.)

This is a translation by IDC of the article published in Turkish on October 25, 2010 on Turkiye Newsweek: http://www.newsweekturkiye.com/haberler/detay/43786/Fethullah-Gulen