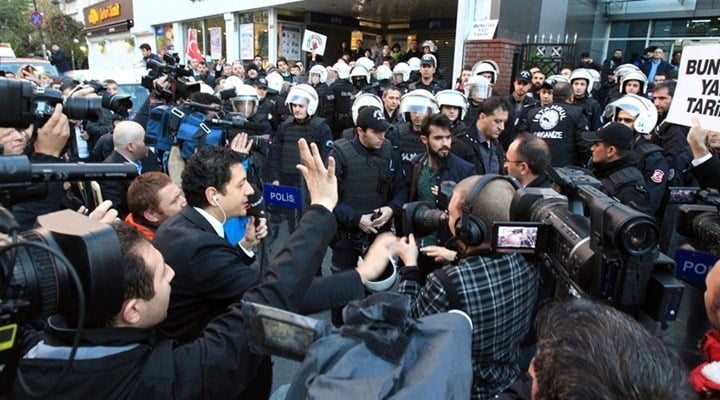 On Wednesday, police raided the offices of the critical İpek Media Group, cutting Kanaltürk's broadcast and attempting to silence news channel Bugün TV. Legal experts note that the right to information is protected by the Constitution, and that violating it can carry a five years prison.

On Tuesday, the officials who arrived to enforce the order did not have a legal authorization to present and implement the decision. With armed police, the officials took a hold of the 22 companies of the Koza Ipek Holding, including two daily newspapers (Millet and Bugun) and two TV stations (Kanaltürk and Bugün TV). Protestors outside the facilities were tear-gassed, harassed (and arrested?) by the police.

On Wednesday morning, 40 civilian police stormed the offices of Ipek Media Group. The new trustees from ATV, along with police escorts, forcibly entered the building housing Bugün TV and Kanaltürk. The police and trustees, immediately upon entering the Kanaltürk broadcast room, cut the station’s live broadcast and aired a public service announcement. Despite efforts by the police to cut it, Kanaltürk and Bugün TV then launched a joint broadcast lasting more than 10 hours. The police then evacuated the floor of the building from where Kanaltürk broadcasts and the cables that transmit the live broadcast were unplugged. Bugün TV Editor-in-Chief Tarık Toros was escorted by police officers out of the broadcasting room. A hand-written notice from the new executive board of Bugün TV declared that Toros had been sacked. The broadcast was cut around 4:40 pm.

There was undue harassment of civilians, journalists, and politicians displaying support for the Koza-Ipek media group at its Istanbul headquarters. The Turkish Rapid Response Force fired tear gas and water cannon to disperse protesters outside the offices. Journalists were arrested and handcuffed from the back, with several of them being punched and kicked. Two reporters were hospitalized by the police, one with severe injuries to his internal organs and the other with a broken leg. According to footage broadcast live on TV, officers used chainsaws to smash through the gates of the media compound.

These media stations that have been a prominent platform for opposition politicians were forcefully taken off the air. Critics say this move aims to silence opposition ahead of polls and is a move to manipulate the elections. The forceful seizure of the Koza-Altin business group and its media branches hinders the dissemination of information and presents serious economic repercussions.

“Considering the volatile economic conditions of countries like Turkey, for there to be no single instance of impropriety in corporate entities that deal with large sums of money does not suit the financial, technical or commercial realities on the ground…There isn’t such a thing as a perfect corporation, accounting system or financial structure in the world. Yet, based on information gathered by individuals and relevant institutions, the corporation in question appears perfect in its official documentation.”

Lastly, a government official asserted that this crackdown on media will expand after the elections. AK Party deputy Aydın Ünal, a former advisor and speechwriter for President Erdoğan, said during a televised interview on pro-government news channel A Haber, “We will most certainly make them answer for their actions after Nov. 1, when the AK Party comes to power by itself.” Ünal was referring to opposition Turkish dailies Hürriyet, Cumhuriyet, Sözcü and Zaman.

Today at his column, Ahmet Altan has talked about what has been spoken when his friends from Gulen Movement visited him. The Movement was on target following the releases of Nedim Şener and Ahmet Şık. At the reports of Stratfor that Taraf published, Movement faced serious allegations. After all these, representatives of the Movement visited […]