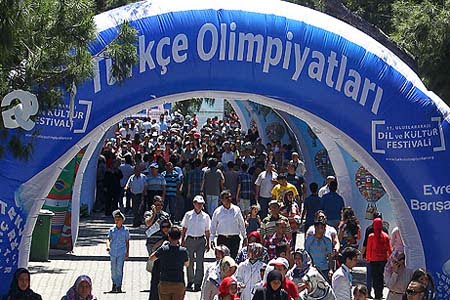 Five million people are expected to watch the wide range of shows to be performed in 55 Turkish cities as part of the 11th International Turkish Olympiads, a festival that celebrates the Turkish language and is this year brings together 2,000 students from 140 countries.

Most of the activities will be held at the stadium in the cities, says Turkish Olympiads media coordinator Halit Soylu, who spoke to Today’s Zaman, stressing there is generally a stampede each year for tickets in each city with locals showing great interest in the performances of the international students who come to Turkey as part of the Turkish Olympiads. Soylu stated they expect 5 million people to watch the performances.

Soylu noted that the Turkish Olympiads have become one of the most leading cultural events across the world.

The inauguration ceremony of the 11th International Turkish Olympiads will be held on June 1 in Ankara’s May 19 Stadium.

Speaking to Today’s Zaman, Turkish Olympiads Ankara Media Coordinator İlhan Yerli said the Olympiads this year are being held as part of the International Language and Culture Festival. Stating that 1st International Turkish Olympiads was held 11 years ago with the attendance of just 17 countries, Yerli said that a total of 135 countries attended the Olympiads last year and this number has increased to 140 countries this year. “Five new countries attended this year’s Olympiads: the Dominican Republic, Libya, the Democratic Republic of Congo, the Brunei Sultanate and Rwanda. Approximately 2,000 students will compete in the Olympiads. These students, whose languages, religions and skin color are different from one another, will compete in 19 categories such as singing, poetry reading and Turkish folk dances.” Yerli noted.

This year’s Cultural Festival was held between May 24 and 26 at the İzmir Fair Center in the western Aegean city of İzmir. Nearly 3 million people attended the festival that was held under the slogan of “Towards Universal Peace.” The three-day event was held at İzmir’s Kültürpark. Children from 140 countries displayed cultural items from their countries and talked about their countries and traditions in Turkish with visitors, most of whom were surprised by the students’ Turkish abilities. In addition, many other activities were held at the Kültürpark, such as concerts and theater performances. Visitors enjoyed seeing different kinds of traditional dress and musical instruments, tasting traditional meals and having their photos taken with the foreign students.

Yerli stated the slogan of this year’s Olympiads was determined by the votes of people through the social media networks such as Twitter and Facebook. He stated that the slogan “Toward Universal Peace,” received a total of 4,739 votes from people. Among the slogans used in the previous Olympiads are “The Language of Love: Turkish,” “We Are Talking the Same Language,” “Come, Let Us All Be Friends” and “Humanity Hand in Hand.”