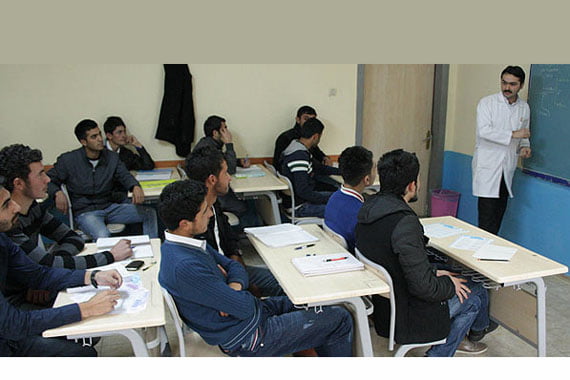 A classroom in a prep school in eastern Turkish province of Kars. (Photo: Cihan, Abdülkadir Erzeneoğlu)

The government’s decision to close down prep schools, institutes known as dershanes that help Turkish students prepare for standardized high school and college entrance exams, is not a step in line with the freedom of enterprise in a democratic society, analysts have said.

“It’s not possible to make out of this behavior befitting a government that defends a market economy,” Seyfettin Gürsel, director of Bahçeşehir University’s Center for Economic and Social Research (BETAM), told Today’s Zaman.

Prime Minister Recep Tayyip Erdoğan confirmed on Wednesday the government’s earlier announcement that it is working on legislation to shut down all existing prep schools, arguing that they operate as a parallel education system.

According to Gürsel, who described the government’s initiative to abolish the dershane system as “very wrong,” if there is a demand for a certain service, then it is natural that initiatives to meet the demand will also be there in a market economy. “If you really think prep schools are unnecessary, then you need to enact reforms that will eliminate demand for them,” Gürsel stated.

Although preparatory schools in Turkey have played an important role in the education system for the past 30 years or so, the government has announced that all prep schools will be shut down at the end of the next school year. Prep schools can serve instead, the government said, as private schools in the future.

Members of nongovernmental organizations headed by the Association of Democracy Inspectors gathered in İstanbul on Wednesday.

“As it is not possible to close down private hospitals in Turkey, prep schools should also be respected,” İbrahim Yayla, a member of the board of the association, said in a public statement delivered in Taksim Square. Noting that public schools cannot equitably provide quality education to all students, prep schools fill in for the deficiency of the state, he underlined.

The government’s plan to ban private tutoring institutions that train students for high school and university entrance exams has divided society and led to fear among some segments of the public that socioeconomic differences may further affect students’ academic achievement after the closure. Many parents who cannot afford to send their children to private schools will face difficulties if the government continues with its plan to transform prep schools into private schools.

In the article, titled “Why it’s wrong to close dershanes,” Yayla also underlined that such a step would be against the very foundations of a freedom-based political system. “In political and legal systems based on freedoms, individuals, either singly or in collaboration with others, can engage in economic activities,” he said.

According to figures from the Ministry of Education, there are 3,858 prep schools in Turkey and they are attended by 2,207,000 students. Out of the 739,000 students who are seniors in high school, and therefore preparing for the university entrance exam, 550,000 attend prep schools.

Opponents of the government’s plan have also noted that the prep schools are a consequence of the many inadequacies of Turkey’s schools and education system, and said that by offering tutoring at affordable prices, prep schools help low-income students enter university.

Cengiz Aktar, who heads Bahçeşehir University’s European Union affairs program, also believes it is not possible to abolish prep schools without first carrying out a complete overhaul of the Turkish education system. Maintaining that this is a decision taken without much deliberation, Aktar told Today’s Zaman that “this would serve to further deteriorate the quality of education in Turkey.”

European Parliament (EP) sources also voiced concern, saying that if Parliament passes the law that would close the dershanes in its current form, it could have repercussions in the European Commission’s next progress report on Turkey.

In a recent statement to Today’s Zaman, an EP source said, on the condition of anonymity, that it was difficult to grasp the debate and stressed that dershanes were a product of Turkey’s education system.

Ayhan Kaya, director of the European Institute at Bilgi University in İstanbul, does not expect that the education system would get any better when prep schools are abolished. “This is a decision made on political and ideological grounds,” Kaya told Today’s Zaman.

On Tuesday, the Anatolian Union of Prep Schools Platform released a joint statement expressing the sector’s concerns. The statement said prep schools are not the cause but a consequence of the problems in Turkey’s education system, while emphasizing that prep schools give low-income students an affordable opportunity to keep up with children of well-to-do families who attend private schools or have access to one-on-one private tuition. The closure of prep schools is a violation of free enterprise, the right to education, the right to work and the right to self-improvement, the statement said.