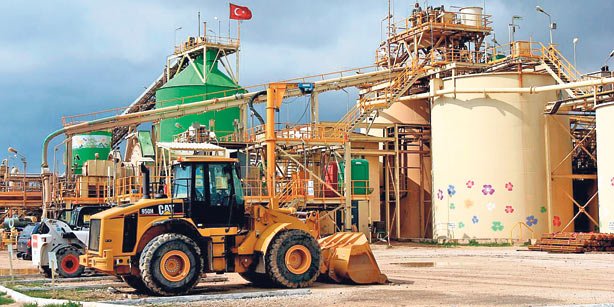 İSTANBUL
Gold mining company Koza Altın A.Ş., the owner of Bugün daily and Kanal Türk TV station, had its activities halted on Tuesday in Çukuralan goldfield, one of the company’s five major gold mines, in a move that has been perceived as the most recent example of the government’s exploitation of inspections and red tape to put pressure on those with critical views.

It has long been speculated that the government has been working to circumvent and subordinate Koza Holding’s companies and to taper the critical coverage of its media groups against the authoritarian policies of the government. Websites publishing one-sided, pro-government articles and commentary mentioned the closure of the goldfield on Monday, a day before the decision of the closure had even reached the company, stirring suspicions that the move was politically motivated.

Koza Altın, which is stock-listed in the Borsa İstanbul (BIST), issued a statement for the Public Disclosure Platform (KAP) to announce, saying that the decision to halt production in the goldfield was illegal and that the company would pursue legal process against it.

It said the company holds a permit and a temporary activity license, which is valid until Feb. 20, 2014, from the Environment and Urban Planning Ministry’s Environmental Impact Assessment, Permit and Supervision General Directorate (ÇEDGM). Koza Altın said all the necessary documents and required information were submitted on time and that every activity has been in full compliance with the laws. Additionally, the approval from Environmental Impact Assessment (ÇED), in a document dated March 11, 2011, is still in effect and there is no problem with it, the statement asserted.

The gold mining company is the only one in Turkey with 100 percent domestic ownership and it is the third private company on the list of top performers in terms of corporate taxes. The company’s Çukuralan field provides employment to over 1,000 workers and operates at European level standards, the statement said.

According to information on the company’s website, Çukuralan field has been active since April 2010 and Koza Altın was projecting to dig a total 3.5 million tons of gold ore from the field by 2017.

After the news of the field’s closure broke, Koza Altın shares in BIST nosedived by more than 7 percent to TL 22.3. Its parent company, Koza İpek Holding, also suffered a steep decline at about the same rate in the stock market, seeing its shares fall to TL 2.46.

The government’s use of inspections to punish those companies that are politically dissent is not new. It imposed a fine of $850 million on publisher Doğan Yayın Holding in 2007, after which the company’s newspapers and magazines had to turn down the volume on their criticisms. Similarly, the Finance Ministry’s inspectors raided some heavyweight energy companies of Koç Holding after Erdoğan openly lashed out at the company, believing it was one of the plotters and instigators of the Gezi protests last summer. This scrutiny of companies’ activities is continuing. steep decline at about the same rate in the stock market, seeing its shares fall to TL 2.46.