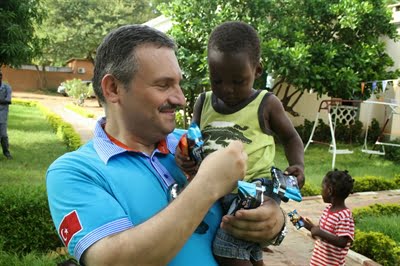 Kimse Yok Mu Foundation, which has been giving off Ramadan joy with the slogan “Fill up your umbrella of mercy with the abundance of sharing” in 110 countries on 5 continents, lifted up this time the orphans in the Nigerien capital Niamey. The foundation gave away scholarships to 250 orphan to the volume of 75 thousand dollars in total and also served iftar dinners to 2,500. It continues to reach out to the orphan around the world.

KYM took a crucial step for the future of 250 orphans in Niger. It has funded expenses of 150 elementary and secondary, and 100 high schools students in the country. In addition to the iftar dinners hosting three thousand Nigerien, the foundation gave away Ramadan food packages to 200 families in need.

A delegation of KYM officials visited the Nigerien minister for primary education, Madame Ali Mariama Elhadji İbrahim, in his office and delivered the 45 thousand dollar scholarship amount for 150 primary school students to the minister. The minister said he’s been watching the foundation’s efforts closely and went on to say: “Kimse Yok Mu is special to both my and the Nigerien’s heart because of the water wells it has established and educational and medical assistance it has provided. It has once again remembered us orphans by offering the scholarships to our orphans.”

Next visit was to the minister for high school education, Mme Bety Aichatou Habibou Oumani, to deliver the remaining part, which was 30 thousand dollars for 100 students. Oumani said KYM is special among the others. “We value your effort in Niger. Although there are other charitable organizations here, we see KYM as one of us and embrace it.”

On June 16, Kimse Yok Mu (KYM) volunteers, geared up to assist Malawians, delivered 40 thousand dollars worth of humanitarian aid to the orphans and guardian parents across the country. In addition, KYM distributed sacrifice meat equivalent of 301 shares slaughtered with the contributions of philanthropists. KYM which offers a helping hand to countries worldwide […]