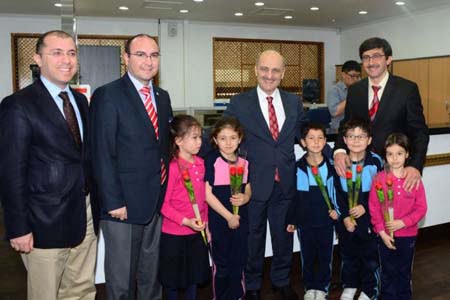 Minister of Environment and City Planning, Mr. Erdogan Bayraktar: “Turkish schools are representing our country successfully. The importance of these services will be better understood better in the future.”

Minister of Environment and City Planning, Mr. Erdogan Bayraktar visited the Rainbow International Turkish School in Seoul, the capital city of South Korea. Students welcomed the minister with roses in the entrance of the school. The general manager of Rainbow International Schools Mr. Esref Saglam, who is a fellow townsman of the minister, said the school is currently educating 65 students.

Minister Bayraktar said, “He always visit Turkish schools in all countries that he travels. They are representing our country successfully. I congratulate with all my heart ‘education volunteers’ who are serving far away from their home country. Importance of these services will be understood better in the future.”

After signing the diary for the remembrance of his visiting the school, Minister Bayraktar presented a vase to Mr. Saglam.

BÜLENT KENEŞ June 5, 2012 His life changed completely when a Turk moved to the apartment block where he was living in Moscow. His parents had divorced and his mother had become an alcoholic and a drug user. “I have turned into a street kid,” he had said. One day he met a member of […]