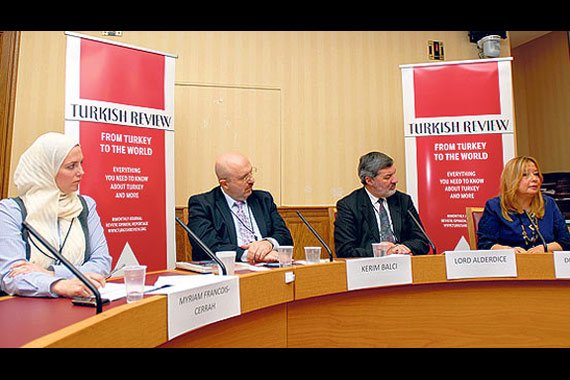 A ceremony held to mark the launch of the Turkish Review magazine in the UK was held in London last week. (Photo: Today's Zaman, Ali Haydar Yeşilyurt)

The launching ceremony for the Turkish Review magazine in the UK was held last week at a seminar titled “Turkey and the Arab Awakening: Do the Arabs need Turkey as a role model?” at the UK House of Lords.

The panel saw a discussion on whether Turkey could really be a role model for Arab nations.

Lord Alderdice spoke about Turkey’s remarkable transition over the past few years. “Turkey has a huge historic and political significance for the wider region, not just for the Middle East or West Asia but the whole of Europe, and the meaning of what happens in Turkey is something that is profoundly significant in all sorts of areas — religiously, politically, economically and socially.”

Turkish Review Editor-in-Chief Balcı spoke about the impact of tourists, expatriates and refugees on Turkish society, explaining Turkey’s increasing role as a familiar sanctuary for all, not just for refugees but as a meeting point for all foreigners.

Dr. Aybet commented that Turkish society in general is proud of the warm reception extended to Prime Minister Recep Tayyip Erdoğan during his trips to the Middle East. “How we are seen there is actually a feel-good thing,” she said.

Francois-Cerrah said Middle Eastern countries are already getting their inspiration from Turkey, such as the Islamic-leaning parties of Morocco. “Many in the Arab world are reassured by the combination of a democratic process and a commitment to the religious identity, and a recent poll found that Arabs see Turkey as a champion of regional peace and a role model for religion and democracy living side by side, with 78 percent approval ratings for Turkey and its policies,” she said.

The panel concluded with the suggestion that Turkey is not a role model for the Arab countries during this time of change and transition, but an inspiration. The launch of the Turkish Review bi-monthly magazine will offer insights on the Turkish perspective of the world.

Turkish Review aims to act as a forum for both journalistic pieces and peer-reviewed academic articles on Turkey’s politics, society, economy, culture and history, explored within both domestic and international contexts. The objective of the magazine includes information about events within Turkey, developments outside of but relevant to Turkey, and global affairs from a Turkish perspective. The term “Turkish perspective” means adopting a productive approach, with an inter-disciplinary, comprehensive, in-depth and insightful attitude while maintaining accessibility, uniqueness and independence and, above all, making use of positive, non-orientalist, de-colonialist and dialogic language.