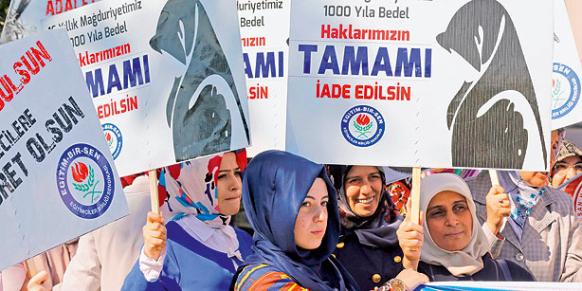 BEGÜM BURAK
The Feb. 28 process in 1997, which has been defined as a “post-modern coup” in the history of Turkish politics, opened a brand new chapter for both the internal and external affairs of the Turkish state. The birth of the Justice and Development Party (AK Party) in the aftermath of the 1997 coup and the argument of founder of the party Recep Tayyip Erdoğan that the AK Party cadre does not wear the shirt of political Islam anymore have changed Turkish politics in a radical way.The charismatic leadership of Erdoğan and the lack of any other remarkable opponents along with both economic and political problems which the political actors of the time were unable to solve all paved the way for the electoral victory of the AK Party in 2002. The early years of the AK Party rule witnessed the acceleration of the EU reform movement. The democratization packages have contributed to a more healthy state-society relationship and the otherized and marginalized segments of the society like the Alevi or Kurdish citizens have for the first time got the chance to discuss their problems in official circles. The economic well-being and the end of the military tutelage empowered the AK Party. The desperate situation of the political opposition has also empowered AK Party rule.

The democratic politics stimulated by the AK Party rule has gained a considerable degree of progress. However the Dec. 17 operation has made it clear that the democracy discourse and the policies for a more liberal and democratic Turkey that the AK Party has adopted were not sincere at all. What the AK Party understands from the term “democracy” is almost equal to ballot box victory.

In contemporary Turkey, how democracy has been undermined day by day is apparent to all reasonable people. Here is a list revealing the demise of democratic politics in Turkey and how politicizing Islam has destroyed liberal democracy and polarized the society:

-Rule of law is a sine qua non element for a democratic regime. However, since the Dec. 17 corruption and graft probe, AK Party rule has become engaged in fabricating a bizarre legal mechanism — including the HSYK  (The Supreme Council of Judges and Prosecutors) law aiming to protect the interests of the of the government circles — which is far from the notion of the rule of law. The principle of the rule of law never tolerates a head of the government who threatens prosecutors.

-Separation of powers is an identifying feature in democracies. However, in the aftermath of the Dec. 17 operation, the executive branch has begun to dominate the judicial and the legislative branches.

-Press freedom is very important in liberal democracies. The financial and administrative pressure exercised upon the critical media outlets by the government and the emergence of a bizarre group of media actors called the “pool media” applauding every single step of the government and acting like a weapon against critical media have already constituted a serious blow to press freedom.

-Free academia is another significant element in liberal democracies. However in Turkey, the ideological orientations of academics are used as a tool of carrot-and-stick policy. To be honest, this phenomenon is not new, but it is true that the academics critical toward government policies today do not feel free.

-Pluralism and the maturity of the tradition of criticism determine the quality of democracy. Democracy in today’s Turkey paints a rather bleak picture in terms of this point too. Any person/group/movement/media actor/political actor/bureaucrat/academic who criticizes and/or opposes Prime Minister Erdoğan and the government is immediately stigmatized as a traitor and a member of an ill-defined parallel state structure — a structure used by the government as an imaginary enemy to threaten and scare opposing actors — the latest example of this has been evident in the clash between head of the Constitutional Court Haşim Kılıç and the government spokesmen. Kılıç has been accused of “preparing his own end” by Interior Minister Efkan Ala.

-Civil society is another sine qua non element for democracies. Although Hizmet movement sympathizers have positions in state offices, police departments, the media sector, the finance sector, the educational field and the judiciary, this does not turn it into a political unit. Hizmet is one of the world’s leading civil society movements. The threatening remarks and the derogatory discourse of Erdoğan against Fethullah Gülen and the Hizmet movement is totally at odds with democratic norms and principles. Labelling the Hizmet movement as a tool used by the enemies of the “new Turkey” to overthrow the AK Party government undermines both democracy and the prestige of the country outside. The Hizmet movement, which has an important human capital both inside and outside Turkey, is a chance for a more developed and prestigious Turkey. Fighting the Hizmet movement and starting some kind of McCarthyism against the so-called parallel state turns Turkey into an authoritarian regime wherein Islam is used as an ideology to maximize interests and the ballot box victory is seen as the true democracy.

Turkey today is witnessing how authoritarianism is taking the place of democracy through the instrumentalization of religion for political purposes with the ultimate aim of ending the Hizmet movement. The list stated above shows through which methods this ultimate aim has been sought so far. However, what the political elites pursue today can only serve their aim in the short term; the real “new Turkey” will come into being on the day the corruption is punished. What Turkey needs is justice and democracy and politicizing Islam only serves daily political interests like we see today.