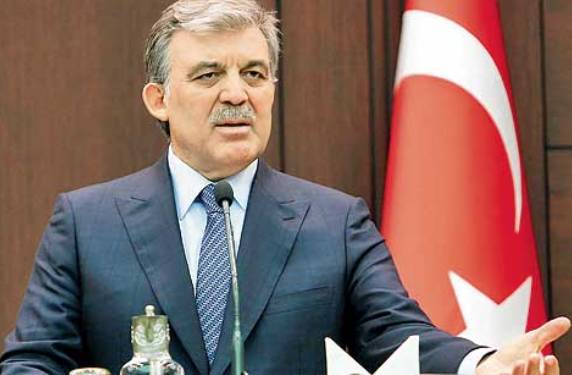 President Abdullah Gül has dismissed calls for him to be more active in tackling the political turmoil Turkey is facing due to a recent graft scandal that has implicated prominent businessmen and the sons of ministers.

During a joint news conference with his Romanian counterpart, Traian Basescu, Gül was asked to respond to the Journalists and Writers Foundation’s (GYV) calls for him to intervene in Turkey’s political turmoil.

The foundation called on Gül “to be on duty,” a Turkish expression that roughly means, “do your job when necessary.” The president dismissed the question, saying, “Am I not on duty at the moment?” simultaneously dodging the question with a play on words and hinting that he was, in fact, “on duty.”

When asked about his meeting with Republican People’s Party (CHP) deputy Erdal Aksünger, Gül said all his meetings are conducted in the public eye, adding that he is open to meeting with the members of any party. He went on to add that long detention periods for prisoners should be abolished and that work to resolve the issue was ongoing.

During the press conference, GYV Chairman Mustafa Yeşil said the GYV is calling on Gül to take action to prevent risks to the constitutional order, the separation of powers, checks and balances, the independence of the judiciary and the rule of law.

“The public expects him [Gül] to use his powers and authorities under the Constitution to investigate the interventions that sought to render the law dysfunctional, in terms of the graft and bribery investigations. It is vital for the president, who represents the unity and integrity of the country and the state, to adopt a constructive and proactive approach to this process, as this is crucial to avoid the undermining of social peace, dragging the country into chaos, the victimization of a significant portion of the country via politics, the media and the public and, most importantly, it is crucial for justice to be done,” Yeşil said.

When he was asked by a reporter to give further details about the GYV’s call on Gül, Yeşil said Gül’s powers are designated by law and he represents the authority that has the primary responsibility for a well-functioning state, adding: “Gül can investigate the recent unlawful developments, the massive reassignments of police officers and prosecutors and the profiling allegations through the State Audit Institution [DDK] to ensure the functionality of the law in the country. The GYV believes that the president should use the powers given to him by law as an independent authority.”