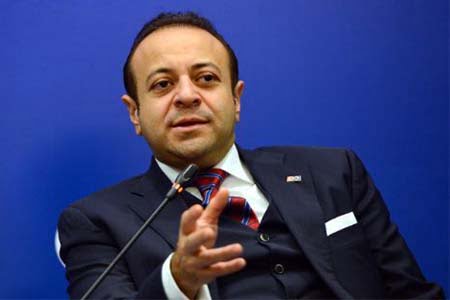 State Minister and Chief EU Negotiator Egemen Bağış said, “We are trying to get into the EU, but as far as I can see thanks to this school the EU nations already prefer us.” The minister said every Turkish school opened abroad reflected the tolerance of Turkish culture.

State Minister and Chief EU Negotiator Egemen Bağış, who is currently on a visit to Denmark, yesterday visited the Österbro International School, which was opened by Turkish entrepreneurs in Denmark.

The school’s principal, Necat Asanovski, said there are 155 students from 38 countries in the school, which started its educational activities last year. Asanovski said, “Parents feel comfortable sending their children to our school because they are highly satisfied about our counseling services. Children of 24 ambassadors in Copenhagen go to school here.”

Bağış, who said he was impressed by the diverse backgrounds of the school’s students, commented, “We are trying to get into the EU, but as far as I can see thanks to this school the EU nations already prefer us.” The minister said every Turkish school opened abroad reflected the tolerance of Turkish culture. He said he believed that every student that attended Österbro International would eventually become a representative for Turkey and lobby in its favor in the future.

Bağış took a tour of the classrooms and spoke to the teacher’s about the European Union. “I can’t possibly convince all 500 million who live in Europe by myself. Help me convince them that Turkey’s membership will be good for Europe. Tell everyone you know that Turkey should become an EU country.”

The minister also chatted briefly with the younger students in the school’s kindergarten class.