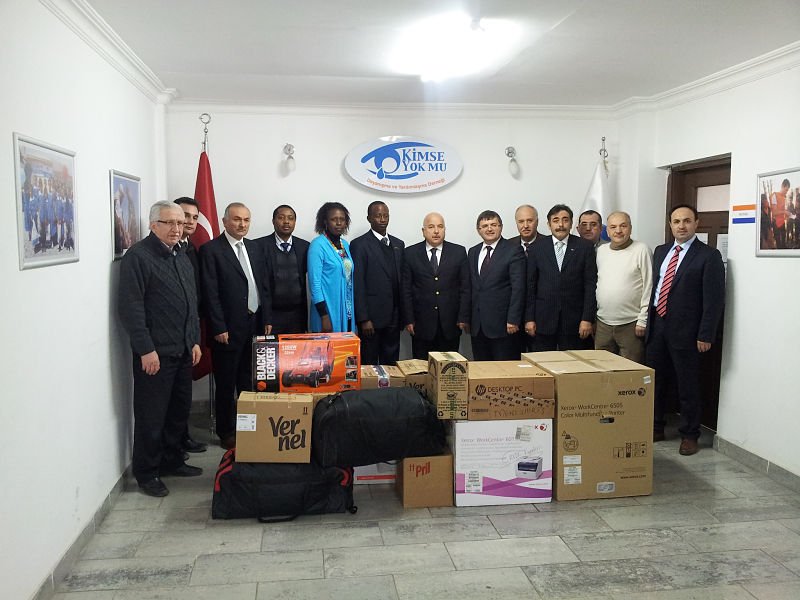 As part of its humanitarian diplomacy/gesture, the Kenya Embassy staff, family members and friends led by the Charge D’ Affaires, Mr. Kimwole Kiptiness Lindsay, having been touched by the plight of Syrian refugees in Turkish camps, particularly in the winter season, donated dry food stuffs, sweets and warm clothes. The donations were channelled through Kimse Yok Mu (or ‘Is Any One there’), a Turkish Non-Governmental Organisation on 29th January, 2013. It is noted that Kimse Yok Mu is one of the international NGOs that actively responded to the Horn of Africa humanitarian crisis in 2011 that saved the lives of thousands of Somali refugees from imminent death due to prolonged drought. Kimse Yok Mu is also actively involved in Kenya, where it supports education andhealth programmes to marginalised communities in rural Kenya and has provided humanitarian aid to the Daadab refugee camp.

Currently Kimse Yok Mu is undertaking an education and health project in Malindi, which would greatly benefit the local community. During a breakfast meeting at the Kimse Yok Mu premises in Ankara, the Charge d’ Affaires expressed Kenya’s gratitude to Kimse Yok Mu for its humanitarian and noble programmes in Kenya and encouraged them to extent the support to other needy communities in Kenya. He assured them of the Embassy’s cooperation and support. Mr. Kiptiness emphasized that the Embassy has a social responsibility also to support the unfortunate members of our society and it is in recognition of this that he mobilised the Embassy staff, their families and friends of the Embassy to contribute the items. He called on other Embassies in Ankara to do the same. Present at the presentation was Mr.Metin Çetiner, Vice President of Kimse Yok Mu, and members of the Ankara branch Board of Directors.

The Vice President on behalf of Kimse Yok Mu expressed their gratitude to the positive response by the Embassy to their Syrian refugees’ campaign, and the Kenya Embassy was the first to respond and hoped that other foreign Embassies in Ankara would respond.

The ongoing hospital constructions in Somalia, Uganda, Ethiopia and Kenya can be listed as the most typical examples of Kimse Yok Mu’s sustainable development projects which are aimed at fulfilling the medical needs. The hospitals underway in four different countries will be equipped with 35 beds, 2 operation theatres, 2 delivery rooms, 1 intensive care and newborn unit, 12 outpatient service rooms, radiology service and labs.