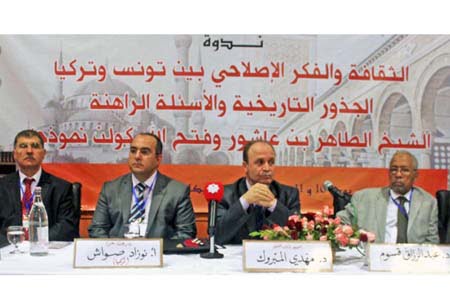 Tunisia, where the civil uprisings in the Arab world originated, recently discussed the Hizmet Movementand ideas of Fethullah Gulen. The symposium jointly organized by Hira magazine and Fadil bin Asur Research Center was entitled “Tunisia and Turkey: Concepts of Culture and Reform in the Cases of Tahir bin Asur and Fethullah Gulen”.

The symposium which was put together in a very short period of time at the request of the Tunisian Ministry of Culture kicked off on Friday, May 10 in the capital Tunis. Academics and religious scholars from countries ranging from Morocco, Algeria, and Mauritania to Bosnia Herzegovina gave presentations at the two-day symposium held under the auspices of the ministry.

In his address, the Tunisian Minister of Culture Mehdi Mebruk said Tunisia needs the example Fethullah Gulen and the Hizmet Movement presented in thought and practice. “Despite being raised in dissimilar atmospheres and conditions, Tunisian scholar Tahir bin Asur and Fethullah Gulen served as two significant models with respect to establishing a culture of coexistence in society. These two models have established practically the same values” Mebruk said.

The director of the host Fadl bin Asur Research Center, Sami Ibrahim, gave his earnest statements on the symposium put together in a very short period of time. Noting that he initially had his reservations about organizing such a symposium, “But they were over after witnessing “Ijma and Collective Awareness” symposium held two weeks ago in Istanbul. There I saw that we are faced with an awe-inspiring global “hizmet” reality and then put my heart and soul into the symposium preparations. What struck me most was that the thought seems to have been perfectly put into practice” Ibrahim said.

Hira magazine editor-in-chief Nevzat Savas highlighted that the symposium was the 10th of its kind held throughout the year and pointed to the positive outcomes these symposiums bring along: “Through these symposiums, we are both meeting the prominent and influential scholars and introducing them as well. Besides, academics and opinion leaders from around the world meet each other and strengthen their ties.”

The symposium having attracted large interest from academia came to an end on Saturday, May 11.

Source: [in Turkish] Cihan, 10 May 2013. English translation is retrieved from HizmetMovement.Com