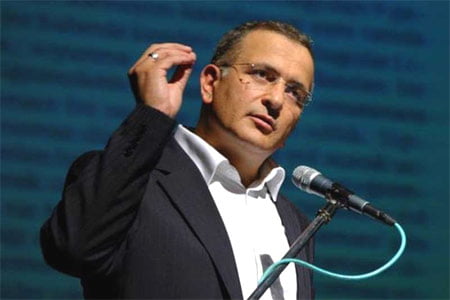 Look at the irony of fate! As the most important graft and corruption investigation ever seen in our country is being conducted, similar incidents are also taking place in different parts of the world. But they are not similar to ours.

As you know, there have been many moves of interference with an investigation where four ministers and their kids are being accused and concrete evidence and documents present a grave situation. In these first days of the investigation, the police chiefs and authorities were removed, new prosecutors were appointed, police authorities were reappointed all over Turkey, everybody covering the issue including the media is being strongly suppressed, innocent people are being insulted and accused of forming a gang. All of this is being done to cover up the corruption.

As this is happening in Turkey, similar incidents are also taking place as a result of the rule of fate.

For instance, the police carried out a raid on the main headquarters of the ruling party of Spain at a time when Spanish Prime Minister Mariano Rajoy was abroad on a trip. The police searched the building for 14 hours to find evidence of corruption. So what did the prime minister of that country do? Did he lash out at journalists? Did he remove the police officers? Is he talking about a global trap and plot? Quite the contrary. In Brussels, where he was to attend the EU summit, he said they were not worried and that they issued all necessary instructions so that the investigation would be carried out properly. Does this undermine his prestige or authority? Does this hurt the legitimacy of his government? The Spanish prime minister has done what needs to be done in a state governed by the rule of law.

Well! Interestingly, another incident of corruption took place in Japan last week. It is argued that Naoki Inose accepted a bribe in the amount of $500,000 during his service as deputy governor and that he became governor of Tokyo a month later. The governor also admitted he received a loan last year for personal needs but he fully paid off that loan, and he said that he did not provide any favors to the firm that provided the loan. He made this statement, but he also resigned. He said he resigned to make sure that the Japanese government would not experience any hardship given that it made huge amounts of investments for the Olympic Games. For God’s sake, is not this a wise and virtuous move?

Not only this, Greek Prime Minister Antonis Samaras congratulated the police officers who arrested a former Greek transportation minister for using a fake license plate. And he said: Whoever breaks the law will be arrested. And do you know where the Greek prime minister said this? He made this statement at a press conference in Brussels. Is the Greek prime minister, whose country is to become term president of the EU in a week, losing prestige in the world?

An interesting incident took place in Uruguay a few days ago. Economy Minister Fernando Lorenzo resigned over bribery charges. In response to allegations dealing with an airline tender last year, he resigned in order to facilitate the judicial process. Uruguayan President Jose Mujica said the minister acted ethically and added, “Our friend will remain disconnected from our government until he is acquitted by the court.”

Abuses may take place in every country; some may do wrong out of lack of control. In such cases, the truth, regardless of who is hurt or affected by it, should be revealed instead of arguing that “nobody in our group commits bribery or thievery.” Relying on conspiracy theories in response to bribery charges supported by evidence and issuing threats will not resolve the problem. The allegations become even stronger as interference in the judiciary occurs and the law is violated.

Besides, those who have Islamic sensitivities and considerations should be extremely alert to such issues as corruption and bribery, because this is a basic requirement for believing in Allah and the afterworld. The Prophet Muhammad left this legacy when he said he would punish a thief, even if it was his daughter Fatima. Caliph Omar said in a sermon, “You people; listen and obey.” A man among the listeners responded, saying: “Oh Omar! We will not listen to you or obey you if you do not explain how you bought the shirt you are wearing.” Omar explained that he didn’t have enough cloth to make a shirt, but his son, Abdullah, gave him part of his clothes to make a whole shirt; money didn’t come from elsewhere. And in response, the ordinary man said, “Now we hear you and we will comply with your orders.” Was this an untrue story or legend? No, this was a true story.

For God’s sake, let’s be fair; let’s not deviate from the real case. What would the Hizmet movement gain out of any harm to the ruling party? Instead of imaginary conspiracies, we should focus on what is Islamic, what is humane and what is legal. The support base could be enticed by ungrounded allegations for a while, but the conscience would not be able to deny such concrete evidence. Inventing crimes out of rage, using state power against imaginary internal threats is a graver crime than the bribery and corruption charges. It cannot be justified in this world or in the afterworld.

As the corruption and bribery investigation was initiated, authorities in the police departments in İstanbul and Ankara were removed from office. There were also rumors that the investigation files would be taken from the prosecutors but, because of these reactions, new prosecutors were appointed instead of removing the existing ones from office. And the additional prosecutors must have seen that the file and its content were so strong that the arrest of the suspects was demanded unanimously. As a result, 16 suspects, including two sons of ministers were arrested. This means that the case is huge, the evidence is strong and the charges are convincing.

In the meantime, a campaign was initiated to intimidate police authorities and the judiciary; people were removed from office and they were essentially sent into exile without making any proper accusations or presenting proper evidence for this action. Would you look at this: 104 police officers, seven police chiefs, 13 deputy police chiefs, 76 branch managers and 14 department chiefs were removed from office. It is argued that 180 more will follow. The deputy chairman of the Finance Ministry’s Financial Crimes Investigation Board (MASAK) was also among those who were removed from office. Managers in the Finance Ministry and even at the state-run Turkish Radio and Television Corporation (TRT) are facing a similar fate. This is officially a witch hunt.

On what criteria are these changes being made? On what basis is this witch hunt being carried out? If this “operation” is being conducted all over Turkey and within a few days of the bribery and corruption investigation, on what information is this being done? And why does this hunt mostly affect the units focused on bribery, corruption and other major crimes?

Justice is what keeps the state strong. Any practice that would destroy a sense of justice leads to the generation of ungrounded accusations and imaginary criminals. This is a violation of rights and a grave offense. Any illegal action that affects innocent people turns into persecution; in history, no oppression can be justified.

Some papers and TV stations are not covering the events of the most extensive bribery and graft allegations in Turkey’s history. They do not make any reference to the charges; instead, they raise propaganda on conspiracies as counter-arguments to the allegations. They accuse the US, Israel and the Gezi protestors of being involved. What they argue in respect to the Hizmet movement sometimes turns into horrible persecution. It appears that partisanship makes some people blind to what is happening. This is unfortunate. Given that political partisanship turns a person into a one-eyed pirate, I believe that I could raise this simple question: Would you have remained silent if the Republican People’s Party (CHP) or the Nationalist Movement Party (MHP) had been accused of such acts of corruption and bribery? Would you have offered similar conspiracy theories? This is not really fair.

An interesting development took place a few days ago with Turkish Airlines (THY). Some newspapers would no longer be distributed onboard. These include Zaman and Today’s Zaman. Why? Hamdi Topçu and Temel Kotil, the CEO and general director of THY, respectively, made no explanation. They informed the distribution company of their decision to reduce the number of copies they would receive. A paper whose circulation exceeds 1,200,000 every day does not need an additional amount of 2,000. However, it is essential for THY authorities to provide an explanation as to what criteria they based this discrimination on — the freedom of people to have access to news reports was restricted — and what papers are now preferred as part of a political operation. Arbitrary practices will never end. If this state of affairs persists, everybody will resort to arbitrary practices. Who knows, maybe a ministry would cut off natural gas, another would send tax inspectors and another one would cease supplying water. Well, somebody was saying, “Turkey is not a banana republic.”