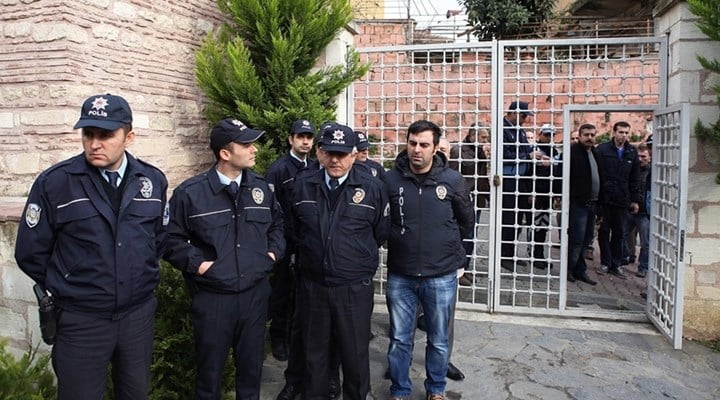 Police stormed the Inter-Cultural Dialogue Center of The Journalists and Writers Foundation (GYV), emptying out the building.

On Friday morning police stormed the Inter-Cultural Dialogue Center of The Journalists and Writers Foundation (GYV), emptying out the building.

Police were seen removing chairs and other office material out of the Intercultural Dialogue Center (KADIM), owned by the GYV.

The police move followed immediately after orders from an individual, who claimed to be from the General Directorate of Foundations, who arrived at the foundations locations with men from the governor’s office.

The incident is widely viewed as the latest in a series of controversial government backed measures against the Hizmet Movement, consisting of followers and sympathizers of the prominent Islamic scholar Fethullah Gülen, who serves as the honorary chairman of the GYV.

GYV’s members strongly protested the police measure. Underlining that the raid violated standard protocol, high-ranking GYV official Recep Usta expressed; “the protocol states that VGM technical teams can come to the building and conduct examinations; and should they find any violation, a period of a month is granted to us [to fix any issues]. If the deficiencies are not eliminated within one month, the VGM can force the foundation members to evacuate the building within a week. Unfortunately, such a time period was not granted to us.”

Secretary General of the foundation, Dr. Ahmet Muharrem Atlığ, highlighted that the foundation had been operating the building for the past four years, in full accordance to the law, criticizing the lack of any official notification required.

İdris Bal, leader of the Democratic Progress Party (DGP) was also in front of the building located in İstanbul’s Eyüp district, to show solidarity with the group.

Blaming the Gülen movement for allegedly orchestrating the 2013 December 17-25 graft probe, the Justice and Development Party (AK Party) along with prominent media’s attacks on the movement have escalated.

There is wideheld belief that the AK Party’s crackdown on the movement is politically motivated move aimed at swaying attention away from the corruption allegations against government figures. Notably the case was dropped in recent months. Hundreds of police officers have been removed from their posts and detained in police operations since July 22. On Dec. 14, Zaman Editor-in-Chief Ekrem Dumanlı and Samanyolu Broadcasting Group General Manager Hidayet Karaca were detained as part of a media crackdown against the journalists close to the movement. The recent media crackdown attracted harsh criticism from both inside the country and abroad.

In July, the Bolu Municipality shut down two schools belonging to businessmen close to the movement. The municipality hung a sign in front of the closed schools claiming that the buildings had not been approved and that their construction was not in line with municipal regulations.

In August, the same municipality constructed a road inside the courtyard of Fatih College, a school that is affiliated with the movement, despite the fact that the school is surrounded by empty plots of land and that there are no residential areas around the school.

The İstanbul Metropolitan Municipality stopped the construction of an education complex on privately owned land in early June on the pretext that the land would be used as a green area and meeting point in the event of an earthquake. The complex reportedly belonged to Fetih Eğitim İşletmeleri (Fetih Educational Operations), which has close ties to the Hizmet movement.

On June 25, the İstanbul Metropolitan Municipality removed a billboard ad belonging to the Hizmet-affiliated Fem prep school in Mecidiyeköy on the grounds that the school had violated the municipality’s advertising regulations.