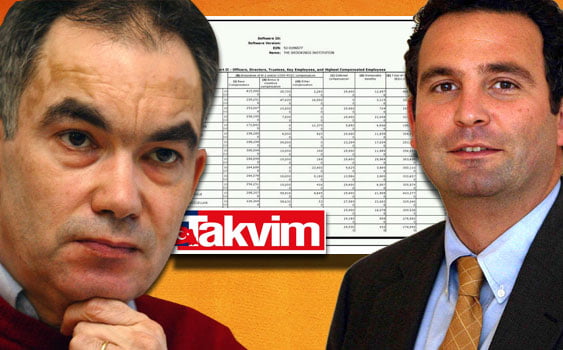 Turkish analysts at the Brookings Institution, one of the most respected think tanks in the US, have voiced their criticism over a news piece published by the Takvim daily which projects the institute as part of the Hizmet movement.

Takvim’s news piece, published on Monday, mentions the institute as an organization established with donations collected by members of the movement.

Kemal Kirişçi, a senior researcher at Brookings, has underlined that all funds provided to Brookings are transparent, and all information related to those funds is available on the institution’s website.

Kirişçi also pointed out that Brookings is to celebrate its 100th anniversary in two years and is one of the most prestigious institutions in the US.

US President Barack Obama, US Vice President Joe Biden and US Secretary of State John Kerry are among the members of government that Brookings has hosted in recent years.

Taşpınar noted that such news is published in order to claim that the Hizmet movement is inspired by the US. “Their aim is to create public opinion,” Taşpınar told Today’s Zaman.

Reactions to the claims were voiced on social media as well. Twitter users posted tweets such as:

— The Brookings Institution, established with donations provided by Hizmet movement, was actually established 100 years ago, but who cares!

— The disinformation has exceeded limits in pro-government media.

— Dear Takvim daily, considering how you had an imaginary interview with [Christiane] Amanpour, you may as well claim that Hizmet established Brookings.