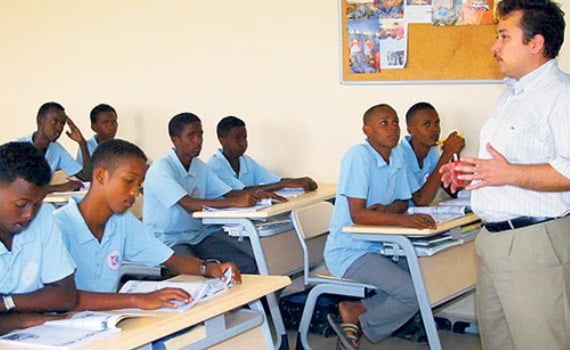 Erdoğan, who toured several African countries last week, pressed ahead with efforts to have Turkish schools affiliated with the Gülen movement (Hizmet movement) in African countries closed. “We have been talking about the status of these schools in the countries we visit and saying they should be closed,” he said during his visit to Ethiopia last Thursday. Erdoğan also said he has been telling African authorities that the Turkish Ministry of Education is ready to offer the same service provided by these schools. “The ministry is close to finishing its preparations to that effect,” he said.

One of the volunteers teachers, Ebru Köse, who has taught in Turkish schools in Afghanistan, Jordan, Pakistan, the Philippines, Turkmenistan and Ukraine, described the efforts to shut down the Turkish schools as “desperate,” noting that these efforts will first and foremost damage Turkey.

Köse said teachers working at Turkish schools under very difficult conditions do not expect anything in return for their efforts.

She explained that Turkish schools quickly win the trust of locals with their quality education, and added that although Afghan parents did not send their daughters to school in the early 2000s, they began doing so after a Turkish school opened in their country.

Nihal Güner, another volunteer teacher who migrated to Kenya with her husband, Ramazan, said her children and husband had health problems while they were abroad and that she even lost her husband to cancer but never thought of returning to Turkey.

She said she worked alongside her late husband on the construction of a school in Kenya and made desks and tables for students using broken tree branches.

“Closing these schools will be the biggest show of disrespect for the memory of those who lost their lives for this cause,” she said.

Another teacher, Sevgi Karyağdı, who worked at Turkish schools in Bashkortostan and Uzbekistan for many years, said she is deeply saddened by the efforts to shut down Turkish schools but feels at ease because she believes God is protecting these schools.

“Those who wish to close the schools will only damage our country’s image,” she said.