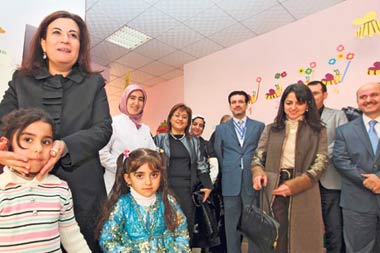 During a visit to a kindergarten and the Işık (Light) University opened by Turkish volunteers in the northern Iraqi province of Arbil yesterday, Çubukçu made a speech lauding the services that Turkish education institutions provide to Iraqis and their contribution to the relations between the two nations. “The works done and the schools built by a group of self-sacrificing education volunteers under difficult circumstances here have established a bridge of feelings between Iraq and Turkey in the name of humanity. We know friendships initiated under difficulties are always firmly established and more enduring. In addition to being world citizens, students of these schools also speak Turkish very fluently, growing up to know all about our language. These students will be architects of the bridges of love that are necessary for humankind’s peace and prosperity,” said Çubukçu, also noting that the graduates of Turkish schools are playing significant roles in the development of Turkey’s southeastern neighbor.

Pointing out that one of northern Iraq’s most pressing needs is education, Çubukçu stressed that important responsibilities lie with Turkey, given its historical relations with the region. “We consider advancing our cooperation in education in line with our increasingly growing economic, social and cultural relations a responsibility. In the era ahead of us, the investments in education by Turkish entrepreneurs here will further expand and Turkey’s hand of brotherhood and friendship will always be extended to our brothers in northern Iraq,” she said.

Education institutions opened in northern Iraq are being operated under Fezalar Education Institution Inc. After Çubukçu delivered her speech, the company’s general director, Talip Büyük, presented her with a plaque of appreciation. Additionally, a student from the Turkish high school in Kirkuk gave the minister a charcoal portrait of her as a present.

Çubukçu and the Justice and Development Party (AK Party) delegation accompanying her left the university after having a photo taken with the students. Among the AK Party deputies who visited the kindergarten and university with Çubukçu were Mesude Nursuna Memecan from İstanbul, Fatma Şahin from Gaziantep and Gülşen Orhan from Van. Turkey’s consul general to Arbil, Aydın Selcen, was also present during the deputies’ visit to the two education institutions yesterday. The members of the Turkish delegation also attended a concert held for them by the students. Çubukçu and Gülşen joined the students in some of the songs they performed.