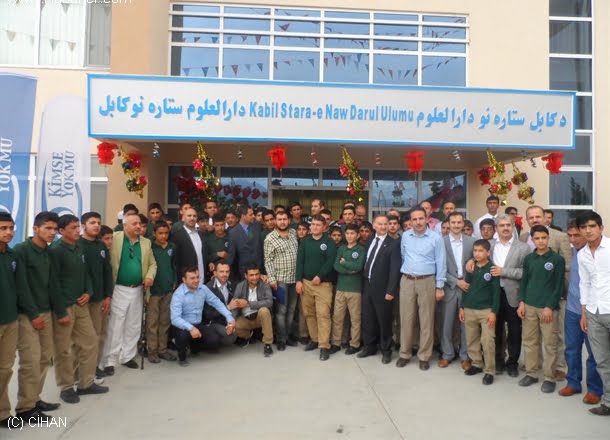 KABUL
A new imam-hatip (vocational religious) school by Kimse Yok Mu has been launched in Afghanistan’s capital Kabul. In attendance of the inauguration of the schools were the chief advisor to president and the former vice-president of Afghanistan Prof. Nematullah Shahrani, deputy minister of education Dr. Sefik Samim, deputy minister of pilgrimage and foundations Mevlevi Abdul Hakim Munip, Kabul governor Abdul Cebbar Takva along with prominent statesmen, religious figures, Turkish businessmen and parents.

Prof. Nematullah Shahrani, in his address, said, “Afghan-Turk schools have been serving our country for long years and listed among best schools ever since. Students at these schools are receiving a quality education and representing Afghanistan at international contests in the best way possible.” Shahrani thanked whoever is involved in making these schools possible. Next, Dr. Sefik Samim addressed particulalrly to the businessmen and KYM and thanked them for making the school available for the Afghan people. He additionally presented ministry’s certificate of appreciation and plaques to both the sponsors and KYM.

Afghan Minister: Many thanks to Honorable Fethullah Gulen for his service

“I would like to thank the Honorable Fethullah Gulen for his service. The Afghan children are receiving modern and religious science together, thanks to his efforts. Equipped with knowledge of science, religion and multiple languages, they graduate from these schools to be leaders and offer solutions to the problems of the country.

The current schools in the country fall short of the need as they lack modern sciences. This is a big step. Unlike the rest, these schools will educate students to earn the country good works.”

Afghan-Turk Cag Schools’ general manager Numan Erdogan said, “We are happy today to launch our new school which has been built at the request of the president Hamid Karzai and the minister of education in person. We are happy that it’s has been made available in one year and launched today. It has 140 students currently. I believe our Afghan people too will be glad to have such a school in their service. I would like to thank to those involved in making it real.”

Following the inauguration, the guests took a school tour and visited the classrooms. Prof. Shahrani asked questions to the students and chatted with them. The school named Kabil Satar-e Nav Darul Ulumu will teach both Turkish and Arabic classes in preparation classes and graduate its students in seven years. It’s one and only of its kind in that it teaches both modern sciences and religion together.

KYM foundation covered the entire expenses of the school with 585-student capacity in 35 classrooms. Students will receive a high quality education at the school equipped with science and technology labs and library. All the students will be housed in the dormitory building whose construction is still underway.

Excerpted from the article published [in Turkish] on Cihan, 1 June 2014, Sunday