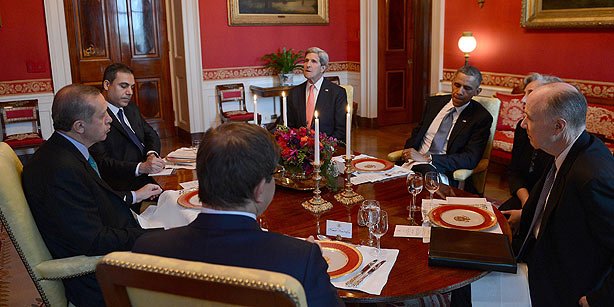 Speaking on a Samanyolu TV program, Karaca claimed that Fidan delivered the file to the US government at the same time that Deputy Prime Minister Bülent Arınç also made a separate, well-publicized visit to Gülen in Pennsylvania.

According to Karaca, Arınç was unaware of both the file and Fidan’s visit.Karaca said a pro-government newspaper had recently reported that Prime Minister Recep Tayyip Erdoğan and Fidan had submitted the Turkish government’s plan to destroy the Hizmet movement to Obama in May 2013 and that this claim has not been denied by the government.

“On one side, Arınç comes and gives his good wishes [to Gülen] and on the other side an [anti-Hizmet] file is being submitted. How could they do this to Arınç, who is respected for his common sense by many? I’d like to ask Mr. Arınç, ‘How could they submit such file during your visit to Gülen?’ This needs to be explained,” Karaca said.

Karaca revealed to the media for the first time that Fidan also met with Gülen at his house in Pennsylvania last spring and Karaca questioned purpose of the MİT head’s visit. “You [Fidan] first submit this file on May 16 and then pay a visit to Gülen. Fidan should be asked why he paid such visit. This is like tying a rope around someone’s neck and then going to visit that person,” he said.

“No one in the Hizmet movement has political expectations. These people only desire to serve people for Allah’s sake. From all these things we can understand that [the government] is attempting to finish off the movement and to do this they went all the way to the US and submitted a file to the US authorities. However, I have no doubt about sincerity of Arınç, who visited Gülen for the sake of their friendship of 40 years and the prime minister had told Arınç to bring back Gülen’s wishes. There are serious games behind all this,” Karaca said.

When asked about details of Fidan’s visit to Gülen, Karaca said Fidan is the one who should answer this question.

Following his visit to Gülen in May 2013, while participating in a television program, Arınç described Gülen as “supra-politics,” and said he is the “conscience of 75 million people” in Turkey. He praised Gülen for only speaking truth and recommending the right things, even to the opposition.

The Gülen movement is a civil society organization inspired by the scholar that seeks to improve education and interfaith dialogue around the world.

Arınç later said that a number of speculative reports had appeared in the media related to the Gülen movement’s activities in Turkey and that he had wanted to ask Gülen about them directly. “We wanted to ask him directly about all this, if he had any recommendations or proposals or if we had made any mistakes,” Arınç said.

Arınç categorically rejected claims of any rivalry or dispute between the government and the movement, saying “I explicitly reject this.”

However, Erdoğan has portrayed the sweeping corruption scandal that broke on Dec. 17, 2013 and implicated close associates and even his own family as a Gülen movement plot to weaken his government ahead of critical local polls scheduled for March 30.

Gülen and his followers are at the center of Erdoğan’s accusations, although the prime minister has so far failed to present solid evidence to prove that the Hizmet movement is behind the Dec. 17 corruption probe.

Erdoğan’s government has reassigned thousands of police officers and purged more than 200 prosecutors in a major reshuffle, which critics say has enabled the prime minister to impede any investigation of corruption.