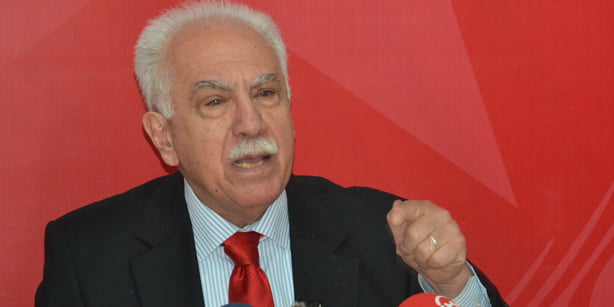 In an interview with Turkish news portal Haberdar on Tuesday, Perinçek openly acknowledged his involvement in the escalating government witch hunt against the faith-based Gülen movement, popularly known as the Hizmet movement and inspired by the teachings of Turkish Islamic scholar Fethullah Gülen.

“He [Erdoğan] supports us. We are the ones who started this [witch hunt]. We have been fighting with the Gülen movement since the 1970s, not him. … The [Justice and Development Party] AK Party has now come to the same conclusion as us on the [Gülen] movement,” Perinçek stated.

Due to an AK Party government-backed law abolishing specially authorized courts (ÖYM) and reducing the maximum period of detention before a final verdict on an appeal to five years, Perinçek was released in 2014.

After his release he made many statements on various platforms, saying Turkey has turned into a country where “movements, mullahs and religious groups” are widespread and vowing “wipe them all out.”

Since Turkey’s largest corruption investigation was made public on Dec. 17, 2013, following police operations in the homes and offices of people from the inner circle of the AK Party, President Recep Tayyip Erdoğan and the AK Party leadership have accused sympathizers of the Gülen movement, especially those in the police forces and judiciary, of plotting to overthrow the government. The movement strongly rejects the allegations brought against it.

Erdoğan openly announced on several occasions after December 2013 that he would carry out a “witch hunt” against everyone with links to the movement. He has also ordered officials in AK Party-run municipalities to seize land and buildings belonging to institutions that are linked to the Gülen movement by any means necessary.

The lawyer of Turkish Islamic scholar Fethullah Gülen has denied alleged remarks made by his client against the ruling Justice and Development Party (AK Party) that were published by a leftist daily on Oct. 9. The leftist Birgün daily published the transcript of an alleged audio recording, which the newspaper claims belongs to Gülen and which was first released by a hacker group, Roj Hack, on the Internet.