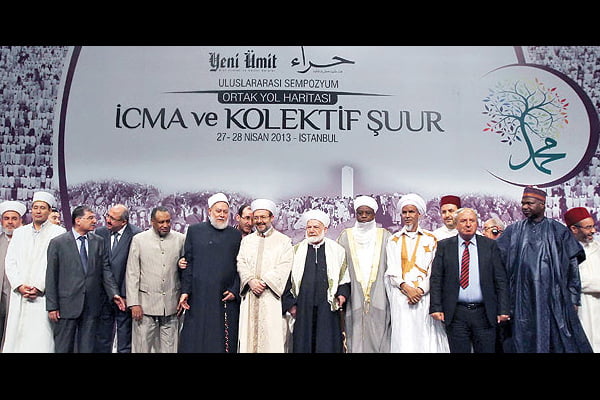 Fethullah Gulen sent a message to the symposium entitled “Ijma as a Common Roadmap and Collective Awareness” which took place on April 27-28 in Istanbul. Gulen’s message received a standing ovation in the hall that a large number of guests crowded into.

In the message, read aloud at the symposium in presence of a large number of scholars and academics from approximately 80 countries, Gulen sent his congratulations and greetings to the attendees. In his message Gulen stated that the most favorable atmosphere for humanity to breathe in is the atmosphere of Islam. “It is everybody’s hope that our scholars at this exceptionally important gathering will offer alternative solutions derived from our fundamental sources to our chronic, age-old problems” said Gulen.

In the later part of his message followed these remarks: “A great many systems dictated to the entire humanity over the last few ages served nothing but to aggravate its pains. If there exists an atmosphere to enable mankind to breathe easily today, it is, without a doubt, the atmosphere of Islam. This atmosphere, practically in every period of history, has been like an ocean with waves, very clean and pure and too deep to contain thought pollutions of any time or place. However, certain intention and viewpoint; exertion and effort; orientation and confidence are needed to reach and truly benefit it.”

Source: [in Turkish] on Samanyoluhaber.com, 27 April 2013. English translation is retrieved from HizmetMovement.Com

DERVİŞ GENÇ, AYTEN ÇİFTÇİ A two-day symposium during which Islamic scholars from 80 countries exchanged views about ijma, an Islamic term meaning religious consensus, took place in İstanbul over the weekend with participants discussing methods of achieving consensus and stressing the importance of solidarity and cooperation in solving global problems. The event, which was jointly […]