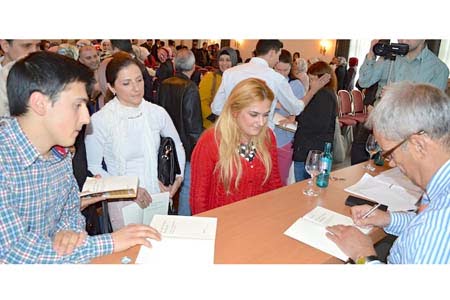 German journalist and author, Dr. Jochen Thies, stated that it saddens him to see that the public is not aware of the self-sacrifice, perseverance and quality that he has observed in the schools in Germany that have been founded by Hizmet volunteers. Noting that in five years these schools will be serving as guiding beacons for the German educational system, Dr. Thies said, “Public schools will be coming to your door, asking you how you have accomplished all this.”

Distinguished German journalist and author Jochen Thies, introduced his book about the schools that volunteers have founded in Germany, entitled “We Are a Part of This Society-A Look at the Educational Initiatives of the Gulen Movement” at the Wiesbaden Kurhaus.

Prof. Christoph Bultmann who also offered his remarks on the Movement of Volunteers at the event, began his speech by reading the 41st verse of Chapter Az-Zumar. “Surely We have sent down the Book to you with the truth for humankind (embodying the truth, and with no falsehood in it). So, whoever chooses to go right, it is for his own soul’s good; and whoever chooses to go astray, goes astray but to its own harm. You are not one appointed as a guardian over them (to assume their responsibility for going right).” “As it is clearly stated in this verse, believers should not attempt to claim custody for anyone else; I see that the people who are a part of this movement work to serve others according to this principle,” said Bultmann. Also quoting from Fethullah Gulen‘s book entitled Perlen Der Weissheit (Peals of Wisdom), “Students who are nurtured through this literature will be able to find their own paths of belief without feeling the pressure of being under anyone else’s custody,” Bultmann read.

Service Through the Heart and Quality of Education

Dr. Tobias Specker pointed out that he too is connected to a community that is a minority, and reflected that he had closely encountered what it means to draw reaction. Expressing the fact that the most important factors in achieving success is service through the heart and the quality of education, Dr. Speck said, “Struggling under pressure in order to portray a successful image will lead to negativities in the quality of service; people will provide high quality service only with a load that they are comfortably able to carry.”

Underlining the importance of self-criticism, Dr. Speck described religion as a protector from fire. Emphasizing the fact that deeming those who part ways with the community as fallen or traitors is a great mistake, Dr. Specker elaborated, saying, “Those who change paths should not be abandoned and left to themselves for any reason whatsoever. People may develop inner ailments that are not visible on the outside sometimes, and in times like these they become even more in need of special attention.”

Germans Turks are Prussians too

After being introduced by the moderator as the star of the program, journalist and author Dr. Jochen Thies began his speech with a smile and read two sections from the book. Starting off with the story of Muammer Akın, who is serving at the BIL school located in the Bad Cannstadt neighborhood of the city of Stuttgart, Dr. Thies then read the story of Kamil Kan, a tradesman who is a sponsor of the TÜDESB school in Berlin and whose two children attend the same school. Explaining that in these schools he has observed the self-sacrifice, perseverance and quality that has died down in the German society, the author expressed his regret at the fact that these are not reflected in and is unknown to the genereal opinion of the country.

Noting that these schools will serve as a guide to the German educational system in the next five years, Dr. Thies said, “Public schools will come to you and ask how you have accomplished all this.”

The Process of Integration Thrown Back Another 10 Years

Relating that he is also of Prussian immigrant descent Thies expressed the fact that he knew very well the hardships that the German Turks were going through. “My family and relatives, too, lived in seclusion from the local people, withdrawn from society for at least 20 years. The German people as a body accept immigrants only after a long period of time. What I ask of you is to be patient. The merging of Germany threw back the process of integration another 10 years. As you are probably following via the press, developments in the right direction are under way. I see a Prussian in every German Turk, with their perseverance, self-sacrifice and patience,” he said. Noting that the economic developments in Turkey will soon turn the country into a center of attraction, Thies asked that the German Turks put forward their potential in the Germany in which they are growing. Following the Q-and-A conversation between the speakers and the participants, Dr. Thies signed copies of his book and had memory photos taken with the book-lovers.

HÜSEYİN GÜLERCE I have been a guest of the esteemed Fethullah Gülen for one week. I am visiting not just as a friend, but as a journalist as well. Being here in this place as a writer is very exciting. You are in the same place, breathing the same air as this person who has […]