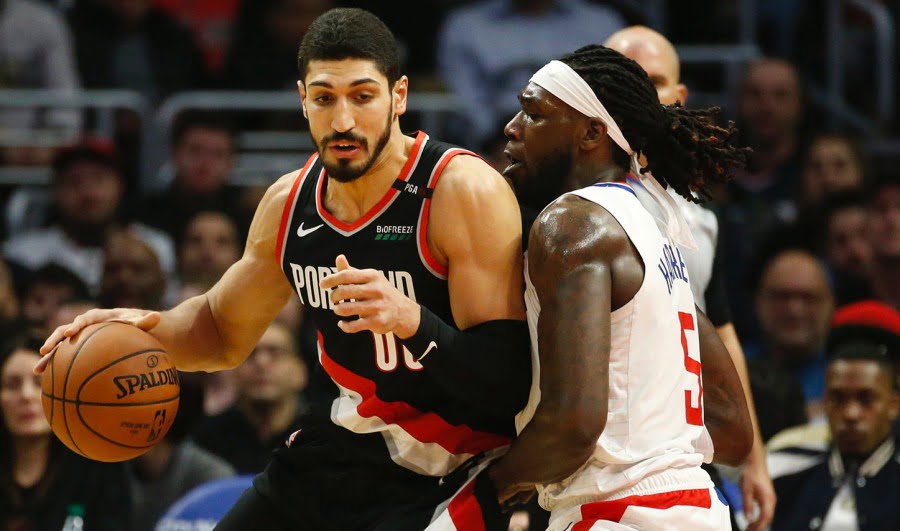 (RNS) — Enes Kanter is not your average NBA player. Yes, he’s 6 feet, 11 inches tall (7 feet on his tiptoes). And yes, he weighs in at 250 pounds (when he’s not fasting for Ramadan). And yes, his hands are bigger than my entire torso.

But how many NBA players have clashed publicly with dictators and their regimes? Or have had their home countries request red notices from Interpol? Or have contacted the U.S. government for the purpose of extradition and prosecution?

Kanter, a Turkish native and current Portland Trail Blazer, has done all of that. He is not your average NBA player, by any means.

Kanter frequently and openly uses his platforms (more than 400K strong on Twitter) to comment on political injustices and human rights violations around the world, particularly in his home country of Turkey. Kanter’s safety is so much in jeopardy these days that he recently missed games in Canada and the United Kingdom due to the threat of being detained.

The former lottery pick for the Utah Jazz is also open and unapologetic about his Muslim faith. He has spoken candidly about unique experiences as a Muslim immigrant in America, like what it was like to find and popularize halal food in Oklahoma City. Or creating spaces for prayer as a Knick in New York City.

I had the chance to interview Kanter about how his faith plays into his daily life, both on the basketball court and in political activism as a human rights advocate.

My faith is important to me. It helps me see the world in a clear way. My faith gives me a target and goal for my life. Because of my faith, I want to help others and it keeps me motivated.

I know without faith I would be very different

Are there ways in which your Muslim identity contributes to your profession as a basketball player?

Good question. I think the two most ways it contributes is food and routine. I eat very, very healthy. Not just halal but I keep away from gelatin, which keeps me away from a lot of candy.

I also fast during Ramadan and sometimes during the year — this cleanses my body often.

The other way is routine. Since I pray five times a day, it creates a routine that I don’t break. Since I live with discipline in this way, it’s easy for me to constantly practice my craft and not miss games or practice.

How does being Muslim inspire your human rights activism? Are there any specific concepts, teachings or stories that inform this?

As a Muslim, which is similar to other Abrahamic faiths, we have to be good to our neighbors. There is a prophetic saying: “Do unto others as you would have them do unto you.”

I live by this teaching. I do not care if you are Muslim, Jewish, atheist or any faith. I want to help you, love you and respect you. I want to fight for all people, not just Muslims.

What is the biggest misconception you’d like to clarify regarding the Gulen Movement and its leader, Fethullah Gulen?

People think that Gulen movement is just Turkish. It’s not. I don’t think even 50 percent of the followers are Turkish. There are Bosnians, Germans, French, Russians, etc. In fact, some are not even Muslims.

I have met professors, doctors, lawyers who are Americans — Christian and Jewish — who are active in the movement. It is not a religious movement, but a social or transnational movement aimed at helping people. Like the YMCA is a place where kids go play sports; its roots are Christian, but people of all faiths go there and participate.

What is it about Gulen and his teachings that you find most compelling?

I love that he talks about education and showing people a positive sign of Islam. He promotes science and technology in a time where it’s not always promoted in the Muslim world. He encourages us to think and get educated and help people of all faiths and backgrounds.

You’ve put your life at risk by taking such a public stance against the Turkish government. Why do you feel drawn to speak out?

This is simple. There are tens of thousands of innocent people in jail, people with limited or no voices, who cannot defend themselves. I am not a journalist or politician, but if I do not stand up for them, then who will?

I did not plan to be the voice of innocent people suffering in jail or being purged from their jobs, but when I saw it with my own eyes I could not remain silent. I think the younger generation has this inside them — we can’t just sit back and watch things happen. We have a platform and we will use it to hold dictators accountable.

Do you have any regrets about how you have handled this political tension? Why or why not?

I don’t have any regrets. I know I am sacrificing my career, my life and my family’s life, but I want to help more than just a few people. I want to help large groups of people. After a few years of speaking out and receiving death threats (from pro-government supporters), I felt down and discouraged.

But then I started receiving support from so many different people — senators, students, doctors, lawyers, actors. This let me know I am on the right path. I just hope that things change in Turkey one day and that people can once again be free and happy.

Where were you when you heard about the massacre of innocent Muslims in Christchurch, New Zealand? How did you feel immediately? And how has that affected you?

I was in New Orleans for a game against the Pelicans. I remember being in my hotel and receiving a text from my manager telling me that something really awful happened in New Zealand and I should check it out. My friends often inform me about such tragedies against any faith. When I went on social media and heard the stories and that it was livestreamed — I was just disgusted.

It affected me like all of the other hate crimes and mass shootings. They bring me down, make me feel helpless, and then I wonder what are we doing wrong as a society to be hurting each other. Thoughts and prayers are nice, but I try to think of ways to help as much as possible.