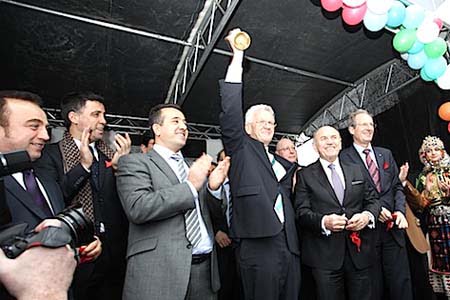 The nine-item inquiry proposed by five CDU (Christian Democratic Union) deputies to Baden Wurttemberg State Assembly has been responded by Ministry of Integration in cooperation with Ministry of Foreign Affairs, Office of the Prime Minister Undersecretary and Ministry of Education. Through the answers, the public, once again, has been affirmed that the Turkish-initiated schools have no hidden agenda. In addition, the report revealed that the Hizmet Movement(Gulen Bewegung) is not under Office for the Constitution Protection scrutiny and that the state government is in a constructive dialogue with the movement’s volunteers.

The response reaffirmed that the Turkish entrepreneurs-initiated private schools in Boblingen and Stuttgart cities of Baden Wurttemberg were founded under the relevant state regulations and are operating in compliance with the legal curriculum.

The inquiry has routine questions

The answers to the inquiry including questions on some ministers’ attendance at the events by the schools in questions, the schools’ affiliation with the Hizmet Movement, whether there is encouragement towards the movement, whether any investigation into the schools or an anomaly exist; once again, affirmed the public that the schools have no hidden agenda.

Among the responses was the statement that no sign of anomaly and any encouragement to a political view whatsoever have been found during the routine inspections. The responses pointed out that the schools are private-status institutions established by foundations that offer education services such as assignment assistance, language and computer classes and supporting tutoring to not only immigrant students but Germans and other community members as well.

The schools meet all conditions

The statement that “conditions including an uninterrupted education, employing qualified academic staff, properly-paid teachers were considered and that no failure to meet these was found when granting permission to the schools” was also among the responses.

“Every government member arranges his/her event attendance individually and is held personally responsible” was the answer to the question concerning some ministers’ attendance at the events held by the schools.

This is not the first time

A group of CDU deputies including Dr. Bernhard Lasotta had proposed an inquiry with a similar content earlier last year as well. In response to that, it was stressed that any violation, by the Hizmet Movement, of the democratic and constitutional order was identified and that an investigation by Office for the Constitution Protection was out of the question.

Gulen is supporting the peace process

The inquiry item related to the Hizmet’s structure, objectives, worldview, goals and whether it poses a threat to the democratic and constitutional order was answered that the Hizmet is following the teachings of Said Nursi as to integrate science and technology with the consistent world of religion; Fethullah Gulen is known for his inspiration and encouragement for human rights, democracy, education and promotion of interfaith dialogue; over the last the last ten years he has encouraged towards a global perspective from a national one and he supports the peace process in Turkey. Additionally, it was highlighted that the Hizmet Movement functions through volunteer involvement rather than the alleged systematic structure.

Office for the Constitution Protection is not scrutinizing the schools

Moreover, it was reported that no violation, on federal or state level, against the democratic and constitutional order, social peace and freedoms has been found and that the Office for the Constitution is not scrutinizing the movement.

Last, the responses underlined that the state government does not regard religious entities with suspicion, on the contrary it protects the institutions forming religious diversity of the state, churches and scientific institutions. It was further stated that it is the duty of the relevant units, not of the government, to monitor schools. Besides, it was said the state government is in a constructive dialogue with the Hizmet volunteers and to end the dialogue is out of the question for the office.

The schools react to inquiry

The schools’ administrators said the inquiry proposals disturb parents and council members and such approaches are disturbing. The president of Boblingen Prisma Schule, Ismail Temel, in his statements about the inquiry, said to be mentioned with baseless allegations, rather than their achievements, above all, disrupts education. “We are educational institutions established and operated under the state rules. We never had another ambition and never will. We have been seeking to provide not only immigrants but also German and other descent students with our education opportunities. Such news sabotages our efforts. Hearing such news plants suspicion in German parents. This is definitely one of the most serious harms that can be done to education. We are operating under the state’s and the city’s departments of education. We had no other affiliations and never will. Our door is open to everyone” Temel said.

The parents alike reacted to the schools’ being mentioned with irrelevant and harmful approaches and said they hope such attempts do not repeat.