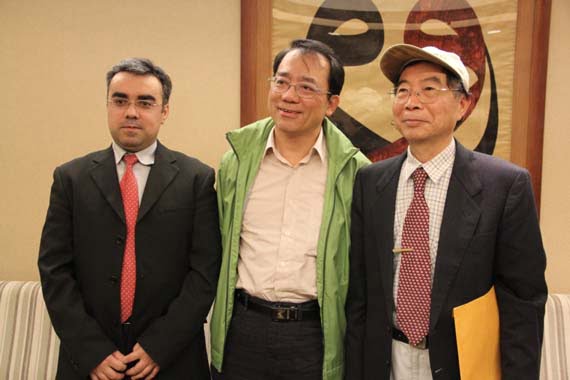 Some think that Muslims are belligerent toward those with different religious views, but Gulen believes in influencing people with one’s heart instead of force, Lin Chin-ming, assistant professor in Asian Studies at Tamkang University, told CNA.

Gulen, a scholar, educator and author, has millions of followers worldwide. He is known for making the remark: “A terrorist cannot be a Muslim, nor can a true Muslim be a terrorist,” after the Sept. 11 terrorist attacks by Muslim extremists in the U.S. in 2001.

The Hizmet (the Turkish word for “service”) movement, inspired by Gulen, began in the late 1960s as an initiative to build dormitories for university students and later expanded into the fields of education, charity and cultural interactions.

Its supporters build schools, charity organizations and encourage interfaith and intercultural dialogue around the world, according to the Taipei-based Formosa Institute, which follows the teachings of Gulen.

Wang Ding-shu, a Russian studies professor at National Chengchi University who has been studying Turkey, said the Hizmet movement is more progressive and more in line with the world trend compared with more conservative Islamic thought.

He touted the movement’s advocacy of tolerance, love and dialogue as a “correct direction” and said he believes the movement will be well-accepted in Taiwan.

Osman Cubuk, vice chairman of the institute, said the Hizmet movement aims to facilitate mutual understanding and respect between different cultures and stresses the importance of education.

“Our purpose is not to promote Islamic culture but to resolve our common problems, including clashes between civilizations, war, poverty and environmental pollution,” Cubuk said, adding that cultural interaction is needed to address those problems.

He said his institute hopes to cooperate with more groups in Taiwan to address these common problems.

Scholars from Taiwan and abroad are expected to attend an international conference on the movement in Taipei Dec. 8-9.